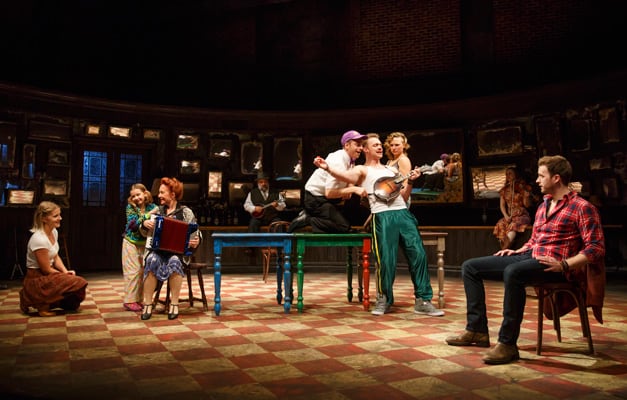 Girl – a Czech immigrant (Dani de Waal) pulls off lines that might seem unnecessarily quirky with a startling honesty. Lines like “Money will make you brave” and “he’s stopped” (in reference to someone who never got past his ex) might seem overly precious, but they work brilliantly here, coming at you filtered through the Czech translation (in English with Czech subtitles).

The dialogue is only a small part of this, though. The visceral Irish tunes would have been enough – smacking as they did of long nights in Boston’s Black Rose –but here, the audience is treated to even more wistful a cappela harmonies and a killer band. As a pianist, Dani de Waal may not be in the same class as Yuja Wang, Liang Liang or others who make your heart stop with their speed and daring, but she does something even more important, breathing life very simple tunes. This is a spinet on stage, not a baby grand, and what she does with it can make you rethink the possibilities of music.

The 12 person band (guitar, mandolin, cello, violin, and other strings) is on stage throughout the entire place, occupying the set of a pub that transforms to other locations in the blink of an eye, reflecting the will of the players and a bit of lighting magic. These quick transitions stretch your mind a bit and evidence a dexterity that runs through the entire production.

The audience was welcomed on stage before the show and during intermission to order a beer, bend an elbow, and hang with the musicians. If you want to pop up on stage, however, do this quickly, because ONCE closes on April 26h.