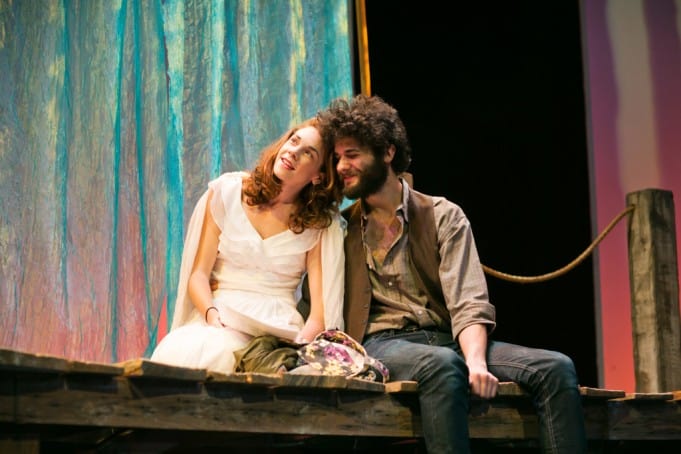 This deliciously chaotic and brilliantly executed take on Anton Chekov’s The Seagull began just before the appointed hour when house staff bellowed, “the fucking show is going to start.”

Such predictable annoyances, like the 40th or 50th repetition of “fucking”, never go away, and are the play’s biggest strength and its biggest weakness. They’re precisely why Stupid Fucking Bird works so well. Only by turning up the volume on just about every annoying aspect of everyone even peripherally related to theatre – audiences, reviewers, narcissistic egos, and pompous pseudo-academics – does Stupid Fucking Bird get at how theatre works and doesn’t work, do we get some truth here. The result was a positively palpable buzz of recognition throughout the audience on Saturday night.

I mean, you can’t watch the Congressional climate change deniers without feeling a wee bit pukey all the time.

If the 40th or 50th interaction of “fuck” makes you roll your eyes, remember, none of us really like hearing the truth anyway. Most thinking people have some type of negativity threshold just to function. I mean, you can’t watch the Congressional climate change deniers without feeling a wee bit pukey all the time. However, as much as that negativity threshold saves us, sometimes we need to get psychically beaten to get a bit of truth in now and then. Stupid F##king Bird does precisely that.

One friend mourned “how can they do this to Chekhov?” He’s right of course. But then this play is about so much that should never happen, murdering Chekhov is the least of it. If that’s your attitude, it’s time to fucking get over it, because it bars you from appreciating just what a gem the SF Playhouse’s production really is.

Stupid Fucking Bird’s annoyances are more palatable because they’re delivered up in lethal one-liners so effective that you’ll be doubled over for most of the play laughing. The entire cast of seven just doesn’t let up. While Johnny Moreno’s performance as tweedy writer Trig, unassuming in a completely assuming way, and Carrie Paff’s, as the narcissistic actress Emma, are positively brilliant, there’s more than enough talent to go around in this piece, with Adam Magil as Con, Martha Brigham as Nina, Joseph Estlack as Dev, Charles Shaw Robinson as Sorn, and El Beh as Mash.

The catch to this of course, is that it’s just so annoying. Do you really want to sit through someone singing “no two days are exactly the same / but every one of them is an unwinnable game…” played on a ukulele? I mean, you can’t listen to Leonard Cohen all the time, if you catch my drift.

A bit of patience delivers a big payoff. Unlike other plays, Stupid F##king Bird is just more upfront about its price of admission. Take heart:  it’s not like sitting through Strindberg. You’ll have fun with this one, even as the annoyance gets to be one more iteration, mirrored back on itself. This one’s such a keeper, it goes in the 2015 time capsule as more magic from the San Francisco Playhouse.