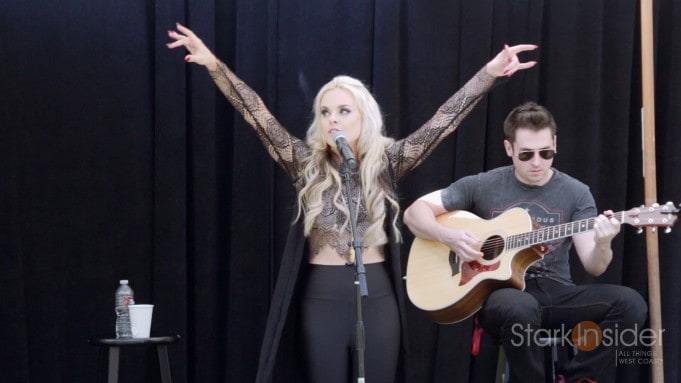 Katy Tiz likes to whistle while she works it.

Judging by the response today in Napa, audiences seem content to whistle right along (it might’ve also helped that whistles were handed out to fans who enjoyed an intimate, stripped down concert on the back lawn of Copia) .

The British recording artist was in town as part of the Live in the Vineyard music festival, and took some time pre-show to talk to Stark Insider about her new album, working with creative people, and her vision of “ultimate success.”

Here’s the BTS video shot today with Loni Stark of Stark Insider at the Copia culinary center in downtown Napa:

“When you feel confident writing, you open up a lot more,” said Katy Tiz when describing being surrounded by a strong creative team. “That’s when you get the real honesty in songs.”

Tiz is now working on her debut album with her new label, Atlantic Records.

ALSO SEE: Melissa Etheridge, MisterWives in concert at Live in the Vineyard

More to come, including the full interview, and concert highlights including Katy’s popular cover of Rock Mafia’s “The Big Bang.”

WATCH: Katy Tiz At Live in the Vineyard, Napa