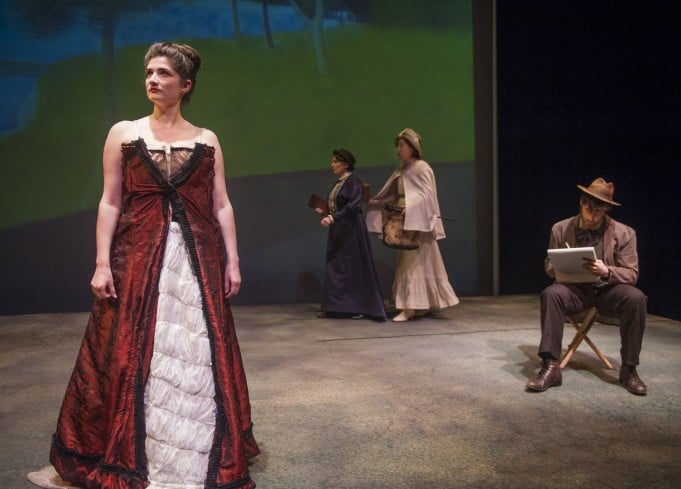 Sunday in the Park with George

Having sat through a sufficient quantum of bad college theatre in decades past, I avoid it – with one exception. More than a decade ago, a Foothill College production West Side Story induced a partial attitude correction, at least as Foothill is concerned. Foothill College stages good productions, well worth spending time and money on. Their current production, Sunday in the Park with George, is no exception. This work – an early ‘80’s Sondheim musical (book by James Lapine) – is drawn from George Seurat’s pointillist masterpiece A Sunday Afternoon on the Island of La Grande Jatte. It will have you revisiting everything you thought you knew about Seurat.

Although the play itself is based on the flimsiest of historical threads and the action bears little resemblance to the life of Seurat, Tyler Bennett’s performance of Seurat had such depth and nuance that it recalls the old Anna Deavere Smith bit about good acting being the furthest thing from lying that she’s encountered. Smith writes, “Acting is a search for the authentic. It is a search for the authentic by using the fictional as a frame, a house in which the authentic can live.” Bennett’s performance was so thoughtful, so in the moment, and so authentic that it takes on a life of its own.

The first act of Saturday in the Park is largely taken up by the failed romance between Seurat and Dot (Katie Nix) and snippets of the quotidian dramas experienced by the characters in the painting. As Seurat’s mistress, Nix gives us a character  with substance of her own. Both she and Bennett have vocal chops to do a masterful job with this. Visually, an incomplete canvas of the famous painting is projected upstage. This projection could have been really cheesy, but it gets fleshed out so slowly and so subtly that it continues to be an ongoing source of delight as shading and other elements appear without you necessarily being aware of the change.

The second act is 100 years later. Seurat’s great grandson (once again, Tyler Bennett) struggles to make it as an artist in the hyper-competitive art world, where art as investment trumps artistic vision. Repetitive chromolumes, gallery shows, and the need for the right connections are the modern analog to Seurat’s struggle for recognition. We see the great grandson use family history, told through his great grandmother’s grammar book and his grandmother’s (once again, Katie Nix) stories. Family history serves as a touchstone from which to move forward in his own right.

That’s not to say the play doesn’t have its weaknesses. While the first act flies by, it still lasts an hour and a half – compensated for by a short second act, which hooks you so much that you wish the time might have been differently distributed. Moreover, the characters of Seurat and his great grandson, both played by Bennett, aren’t sufficiently differentiated, so that they blur, especially when the grandson envisions talking to his great grandmother. This blurring may have been intentional, bringing the past to an ever expanding present, but is creates momentary confusion. Nix, for her part, is more clearly differentiated, but playing someone this old may be a stretch for an actress this young.

Those nits aside, Sunday in the Park with George  is well worth checking out. It’ll be at the Lohman Theatre at Foothill College through March 8th.