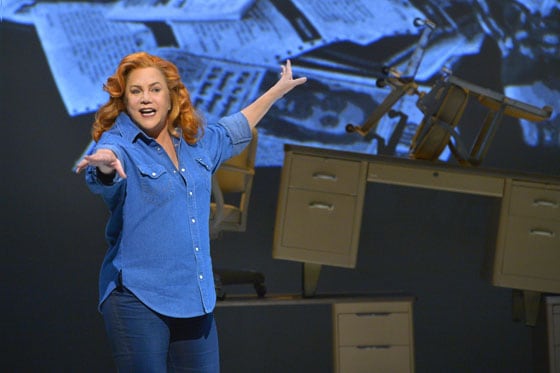 Michael Barrett Austin knows how to stay in character – especially that of the nerdy guy down the hall who makes you impatient. Michael Barrett Austin gets that half the audience is waiting for him to break character – and the other half wants him squashed like a bug, a vicarious justice for having to contend with any variety of officious little snot. That alone would make me lose it entirely.

However, Michael Barrett Austin did something even harder by doing this onstage with Kathleen Turner as Molly Ivins. His degree of control, popping on stage in response to the ‘ding of the AP wire, wordlessly handing off reports before silently exiting as imaginary eyeballs roll,  was so laudable I’m still smirking.

However, I’ve strayed. This was about Kathleen Turner and Molly Ivins.

Now that you’re with Molly Ivins, you appreciate the monologue, scripted by Margaret Engel and Allison Engel, all the more. Turner throws off one Ivins’ zinger (‘Shrub or ‘Dubdub’) after another (the ‘Crock’ for the Houston Chronicle), along with the occasional Ivins’ aphorism (“writing is 75% thinking, 15% typing, and 10% caffeine.”). Turner delivers them so seem improved with age, rather than jaded with time.

It’s a swift trick to wrap around all this, but these elements work together to make Ivins refreshingly vital. As an audience, we don’t see a partisan mouthpiece – which makes it all the smarter. Ivins once said that her craft was that it was about readers looking for connection. Turner connects with her audience  on that level  – while making the point that despite all the crap littering up the Internet, good journalism matters.

If you’re an Ivins or Turner fan, you’ll be very satisfied with this 70 minute production. It runs through January 24, making it a perfect holiday show if you can’t countenance anymore Nutcracker saccharine. Besides, if you keep a close eye, you might just catch Michael Barrett Austin breaking character.