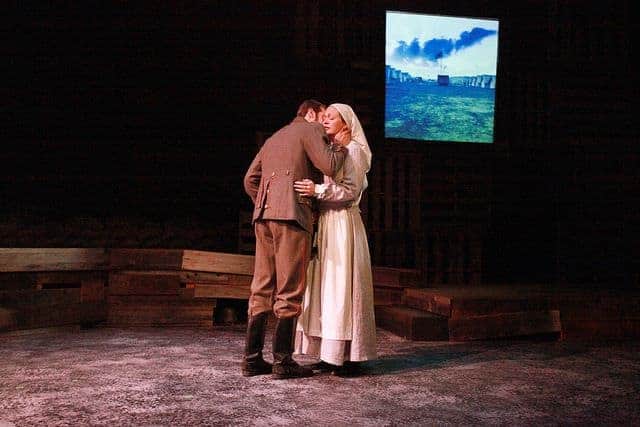 Truce: A Christmas Wish from the Great War

Theater review: world premiere of Truce: A Christmas Wish from the Great War at City Lights Theater in San Jose.

World War I was a long time ago. One hundred years last July, Gavrilo Principin shot Archduke Franz Ferdinand of Austria, thereby lighting the tinder that resulting in 16 million dead. However, unless you were in Europe – or if you’re an NPR junkie – you might have missed the anniversary entirely.

In marking this event, City Lights goes where no other theatre company in the bay area has gone. The only other group I know doing anything about the WWI centennial is a vocal group – the Santa Clara Chorale, whose upcoming Christmas Truce presumably touches on the same material as this City Lights production.

Truce: A Christmas Wish from the Great War is a brand new work authored by Kit Wilder and Jeffry Bracco. This unofficial “truce” comes down to us as almost as a fairy tale, told perhaps when we were reading Erich Maria Remarque’s little gem in high school… however, the Christmas that German and English soldiers came out of the trenches to swap tobacco, sing carols, and even play soccer was entirely real.

Wilder and Bracco’s play works so well because of the obvious lengths they’ve gone to portray make this historically accurate – to make it less of a fairy tale and more of a real-life miracle. This play wins big for bringing that story back to our consciousness.

One could pick nits that these characters remain more as types than genuine people: the long suffering nurse, the poetic boy, the enthusiastic youth, and so forth. However, picking such nits would be entirely beside the point: this is a Christmas show. Christmas stories are all about types – be they the emotionally crippled Mr. Potter in Bedford Falls, or the miserly Scrooge. That’s part of what cultural transmission is about – and the story of World War I’s Christmas truce should be part of that canon.

Director Kit Wilder – and the entire cast – did a masterful job in modulated the emotional energy here. Time and again, they’d run right up to the edge of being maudlin – before quickly reversing course and going back in the other direction. This kept the audience with them all night, Kleenex in hand.

The spare set design by Ron Gasparinetti worked beautifully in this venue. Lavish set designs in small theatres often end up looking like someone’s trying too hard. Gasparinetti has a great eye for just how far to push this. In this case, his stacked pallets to suggest trench were spot on perfect.

We’ve been needing new holiday stories for a while. Truce: A Christmas Wish from the Great War is well-worth bring back – again and again.