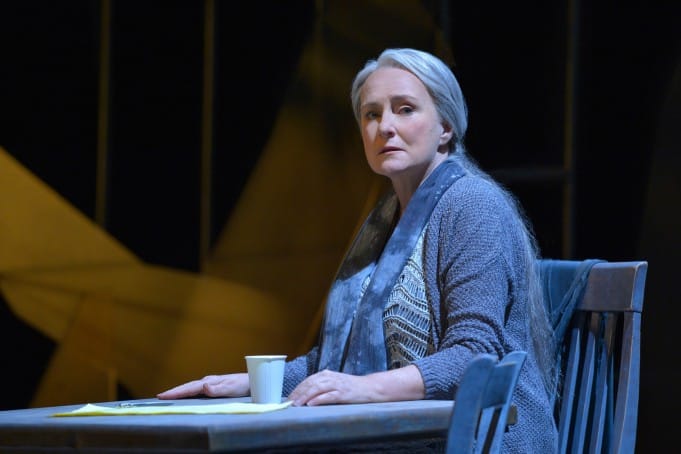 4.5 out of 5 stars - 'Right on the Money'
Directed by Carey Perloff
Starring Sean McKenna
Review by Cy Ashley Webb

Directed by Carey Perloff, Testament just opened at A.C.T. (American Conservatory Theater) in San Francisco. This one-woman play by Colm Tóibin, starring Canadian actress Seana McKenna, is set shortly after the crucifixion. The play depicts a grieving mother, beset by her son’s followers who have only temporarily stepped aside, all wanting her to hew to a particular vision of the story. During the course of the 90 minute play, we hear her side of the story.  While it’s too early to tell, this work might be the most important thing to come out of the 2014-2015 season.

You can’t touch the Christ story without someone bristling as to sources, so we’ll get that out of the way. Testament uses material drawn from the synoptic gospels, but is also informed by work by Bart Ehrman and Reza Azlan, two scholars popular with academics and lay readers alike.

Ehrman writes about the dozens of gospels that didn’t make it into the New Testament. Azlan, working in a related area, frames the crucifixion both in light of contemporaneous Roman legal and penal practices, and with respect to the Jewish response to the Roman occupation. While Ehrman and Azlan approach the story from different angles, both look to the social world of greater Judea during the Roman occupation. Both emphasize that the choice of books making up  the New Testament was driven by the socio-political needs of the early Christian community. Their observations are remarkably uncontroversial, at least with scholars in the field.

This history aside, Seana McKenna’s performance is so powerful that the play operates independently from its Christian story. The more ambiguous name “Woman” loosens the connection to the whole mother-of-god storu, making the play more of a small “c” catholic thing and less of a upper-case “C” one.  McKenna gives us a Woman ferociously loyal to what she knows is true. Maintaining the integrity of her story keeps her very imperfect son alive for her. We immediately ache; our vision of our children is part of who we are. This is the story of Michelangelo’s Pieta. The singularity of her vision, constructed as much from moments spent watching her son and his father come home on Shabbat as it is from watching her son become a stranger surrounded by lunatics, is what she carries after his death. McKenna brings a luminosity to this role, with blue eyes flashing all the way up into the cheap seats.

Colm Tóibin’s script is pure poetry. I was unfamiliar Tóibin, but if this work is representative, he has the spare economical prose of Marilynn Robinson. Woman struggles with “the new coins, the new words,” “the chair that belongs to memory.” Each phrase is balanced for heft and weight.

Alex Nichols’ set design with its blacks, whites, greys, and rebar frame has an intentionally cold feel.  In addition to framing the action, it forces the audience to look to McKenna for all meaning, and focus on the precision of her phrases.

Nichols also created a lighting design that matches the subtlety of the sound design by Will McCandless. Nothing is overstated; nothing threatens to distract from the moment-to-moment intensity of McKenna’s performance. You’re only vaguely aware of the possibility of shadows playing against the back wall during the wedding in Cana scene, deepening imprecisely as the intensity of this pivotal scene builds, just as you can’t tell exactly when the vaguely musical passages begin or end.

Testament will be at the Geary until November 23rd – ending on the anniversary of Kennedy’s assassination.