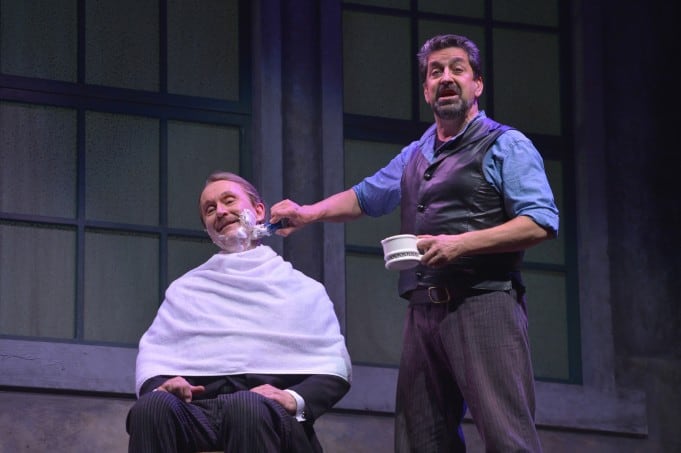 If Joel Grey were around, I might hear him leer: “Even the orchestra is beautiful.” However, with regard to the new TheatreWorks production of Sweeney Todd, the line bears rephrasing. “Especially the orchestra is beautiful.” Under the baton of William Liberatore, bassoon and clarinet wind their smoky way into every crack and crevice of these 1940 London streets, elevating every aspect of this excellent production.

Producing this demonic mixture comprised of equal parts comedy, horror, romance and suspense thriller is no mean feat. So many issues need to be resolved: how far away from the characters do the actors go? Play them as cartoons, and you lack depth and have a bored audience. Play them as real, and you lose all audience sympathy. Robert Kelley succeeded beyond measure in traversing the tension between these two poles, creating characters at once entirely sympathetic, funny, and several frightening sigma out there.

The Sweeney Todd story goes back for at least 175 years – and possibly many more. This take on the material – placing it among 1940s air raid shelters in London – made it simultaneously close and distant, not unlike it’s characters.

David Studwell’s Sweeney Todd wins our sympathies as an easy-on-the-eyes bearded Everyman at home in the dingy London tenements of the 1940’s. However, Studwell’s character doesn’t live in that persona. Ayn Rand might find his transitions to the iconoclastic demon barber of Fleet Street so effective that she’d just have to get over the central conceit likening cannibalism to capitalism.

The evening belonged to Tory Ross as Mrs. Lovett, Todd’s business partner, spouse, and conspirator. In so many ways, Ross is the voice of the show. Unlike Todd, whose trajectory sends him bouncing between two distant coordinates on a  steep slope (and only between those two points), Ross’s Mrs. Lovett is more fully realized. There’s just more places to take this character – and Ross inhabits all of them. Her shop may be stocked with meat pies made from her husband’s victims, but more than anyone, she’s our reliable witness. Through her we laugh the most, cast our querulous eyebrows and let the show take us on its course.

If you’ve been dissatisfied after seeing one of the many second rate productions of Sweeney Todd, you want to give this material a second chance.  TheatreWorks’ production, which will be  at the Mountain View Center for Performing Arts through November 2, is first rate.