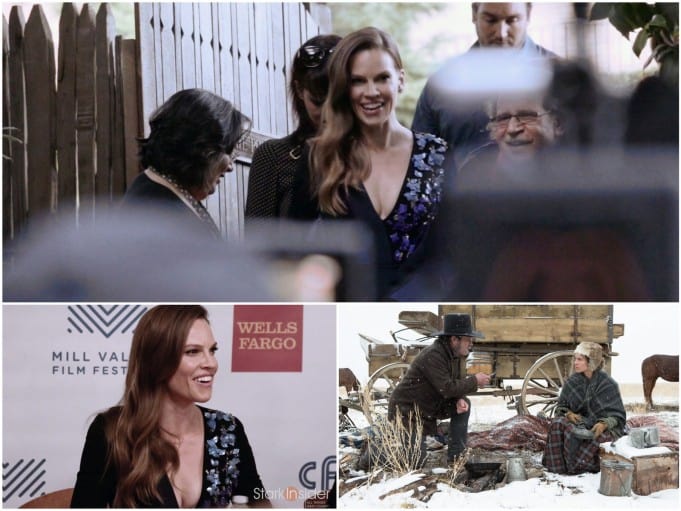 Stark Insider at Mill Valley Film Festival. Day 1: Hilary Swank and ‘The Homesman‘. Be sure to subscribe to SI on YouTube for all the latest videos from MVFF.

She hemmed and hawed.

Then stewed some more.

But finally–finally!–Oscar winner Hilary Swank gave the press the scoop.

What was the one thing that Tommy Lee Jones can learn from her?

The two recently wrapped production on The Homesman–a western drama based on the Glendon Swarthout novel, now making its way around the film festival circuit–so she should know a thing or two about what makes the man tick. Though Jones has directed smaller projects before, it would mark the first time he directed a significantly sized ($16 million budget) film.

The rather innocuous question appeared to stump Swank who praised Jones’ directing ability, and regaled press on the opening night of the Mill Valley Film Festival. “It was reminiscence of working with Clint Eastwood,” she said. “Because we have someone who’s been in the business so long they know how to do everything so well.”

As she entered the MVFF press conference–a jam packed affair–she dazzled in a gorgeous blue color block Peter Pilotto cocktail dress befitting the best of any Hollywood occasion. “Did I overdress?” she joked. “Just a smidge?”

In The Homesman, Swank plays a pioneer woman who teams up with a claim jumper (Tommy Lee Jones) to help escort three insane women from Nebraska to Iowa. The film received favorable notices at Cannes where it was selected to compete in the Palme d’Or. It opens widely on November 7 in the U.S.

“The passion for me lies in that unknown,” she says, talking about what drives her motivation for these types of roles. “Either it’s a boy, or learning how to box or fly. That opportunity to walk in someone else’s shoes is not only enriching as an artist, but as a human being.”

So then: what exactly was the one thing that she could teach big screen veteran Tommy Lee Jones…?

The answer is (but of course) in the Stark Insider video below.

Meanwhile Team Stark is on location for the duration of the Mill Valley Film Festival (MVFF) which runes through October 12, 2014. As we’re wont to say around here from time to time, Let the show begin…

With Clinton Stark in Mill Valley.