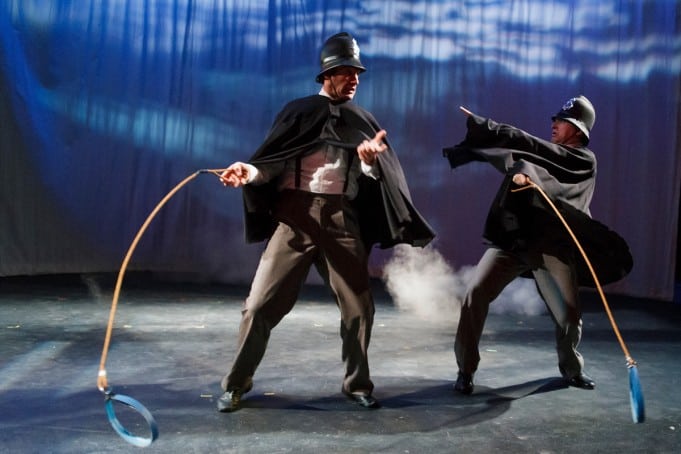 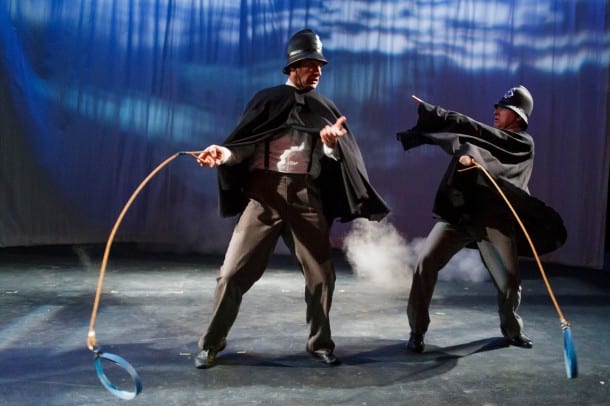 Just seven years ago, The 39 Steps opened in the US, before garnering a passel of awards. However, if you’re looking for the noir Hitchcock thriller, look elsewhere. This production at Hillbarn Theatre is rich in the over-the-top British humor of Monty Python, fast-paced enough to make all our inner ADD children run rampant.

Translating that energy to a small stage is no mean feat and in that respect, the new Hillbarn production has a lot going for it. Mae Matoe’s costumes capture the best of the time perfectly, with an instantly recognizable style that naturally embraces the period’s idiosyncracies (think braces to hold up men’s ankle socks). While her costuming of the more than 150 characters was uniformly excellent, Annabella Schmidt’s costumes were the proverbial cat’s meow.

One of the challenges in producing 39 Steps is keeping the 150 characters played by a cast of four reasonably differentiated. Here, crisp stage direction by Hunt Burdick kept these characters clearly defined, which served to boost the rapid-fire humor. Likewise, the care taken with accents worked well for this production.

It would be easy to credit Brad Satterwhite for his performance as Richard Hannay, as he’s often the straight man and butt of high jinks from Ross Neuenfeldt, Russell Ward, and Elspeth Noble. However, none of this would be successful without the killer comedic timing of Neuenfeldt, Ward, and Noble that keeps this fast-paced spy thriller, which serves more as a Brit equivalent to Get Smart!, than an alternate take on the Hitchcock original, moving forward. 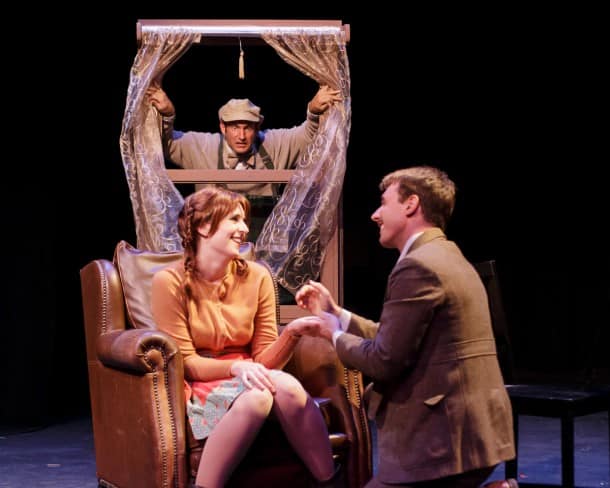 The only catch here, was that in many instances, the story seemed like a series of captured comic schticks, each separate and distinct from the other, rather than a unified whole. Part of this is inherent in the work, but I suspect, if characters hadn’t pulled punches quite so much, this would be less of a problem, but as it stands, it’s even more aggravated by the lack of live music.

This criticism aside, the The 39 Steps is a delicious bit of silliness that will be running through November 2nd.

On a final note, this is Hillbarn’s 74th season. It approaches its 75th anniversary with new offices and bathrooms, the construction of which is a work-in-progress. Hillbarn, which knows its audience and serves them well, provides some of the best community theatre on the peninsula. One wishes them as they go into this season.