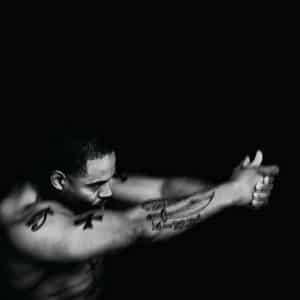 Black on black, blue on black, Michael Brown, Oscar Grant, Trayvon Martin, Johannes Mehserle – the whole thing whirrs, going faster and faster like a news story you just wish would finally end. Eventually, even hearing the news reports over and over removes a little bit more of your humanity. It’s like listening to reports on Gaza – the soul-destroying story that won’t go away.

Cops and Robbers dive bombs straight into one such episode. With many in the audience turning off stories about the Ferguson riots as they entered the Marsh, Ferreira’s performance was not so much theatre, but a stepping back into the same story that just got switched off. This profoundly serious work just opened at the Berkeley Marsh and is well worth taking in.

The material in Cops and Robbers is as remarkable as its writer and performance artist, Jinho “the Piper” Ferreira. “The Piper” was one third of Flipsyde, an alternative hip hop band that toured internationally with Snoop Dogg, the Black Eyed Peas, etc. etc., Even the most mentally flexible would find him an unlikely applicant to the Alameda Sheriff’s Academy – let alone as an Alameda County Sheriff’s Deputy.

Ferreira’s work addresses the contradictions across his experience by exploring the killing of a black thug by a black cop. Seventeen different voices, each with a different perspective, sketch out unexpected boundaries of moral culpability in Oakland.

With many in the audience turning off stories about the Ferguson riots as they entered the Marsh, Ferreira’s performance was not so much theatre, but a stepping back into the same story that just got switched off.

Ferreira inhabits his characters easily, and flips through them with lightning speed, racing from the hip hop poetry re “the vernacular of the virgin who fucks the world in every day in every way” to a steady drone of “nigger-bitch-nigger-bitch-nigger-bitch-nigger-bitch,” with brief forays into the impossibly blond, uninformed newscaster Emma Instigator parroting lines through a newsfeed. At the outset and end, the piece is framed with words  from a tribal elder – not unlike that of Okonkwo in Achebe’s “Things Fall Apart” – about laying down your life for children past, present and future – and banishment from the village  for failing to reply to assaults thereon.

While individual portrayals reveal both more and less than you hoped for, the mosaic-like fusion feels very much like that of Anna Deveare Smith, with whom Ferreira studied. You’ve seen Ferreira’s  characters before, if only at the periphery of your vision. If violence in Oakland seeks (as Anne Herbert might observe) “a solution from a whole other place to a problem not yet fully perceived,” Ferreira’s multiple portrayals bring us one step further.

Those who are remote from this material –perhaps ensconced in the suburbs – may find Ferreira’s material at once strangely close and impossibly  distant. There’s not a lot for an outsider to grab to better negotiate that distance, with a style as harsh as the content. This work provides a chance to ponder the dimensions of that divide. However, those who come to this work from a distance aren’t necessarily the target audience. This play has been out since last summer – a period coinciding with a reduction in Oakland’s homicide rate. You don’t get that by playing to the ‘burbs, or suburban kid hip hop fantasies.

You’ll also come away from Ferreira’s performance knowing that some people think very seriously about Oakland violence – an observation that sounds facile, but isn’t always evident from watching the talking heads. Past post-show speakers include:

Saturday night’s speaker was Geoffrey Godfrey, Executive Director of Oakland California Youth Outreach, who spoke to why you can’t arrest your way out of the violence in Oakland.

The magic of the Marsh is that it brings gems like this. Artistic director Stephanie Weisman continues to find new and important works from voices not appearing in other Bay Area venues. One is grateful to her for founding this treasure that will celebrate its 25th anniversary with a gala on November 8th, with the Marsh All-Star Performers and A Taste of the Neighborhood.