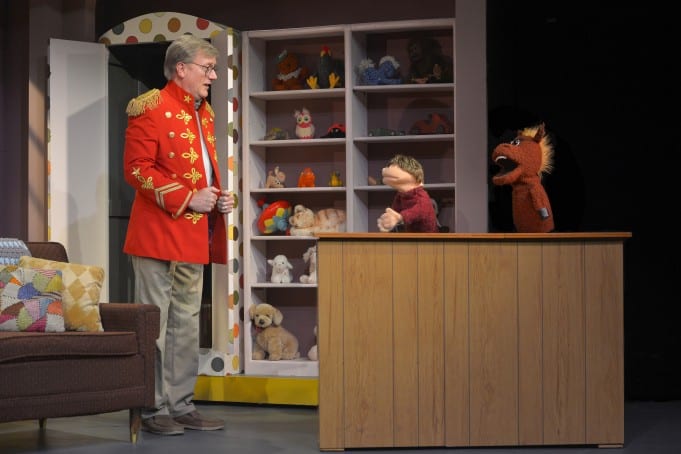 Some of the most satisfying moments in Bay Area theatre evolve out of TheatreWorks’ “New Works” festivals. These include David West Read’s comic drama The Great Pretender, which just opened at Palo Alto’s Lucie Stern Theatre – and The North Pool, which spoke to a city still soul searching in 2011.

The Great Pretender will seem like home to those who remember a golden age of children’s programming in which content – though neither particularly didactic nor high powered – was educational and entertaining. I’m thinking here of Captain Kangaroo, hosted by Bob Keeshan, with puppeteer Cosmo Gus Allegretti, who brought us Bunny Rabbit, Mr. Moose, Grandfather Clock, and others. In a New York Times interview before his death, Allegretti spoke to the difference between the show and the competition: “Keeshan was looking to go against the grain, to do a quiet, gentle show when the others were loud,” he said. “‘Kangaroo’ was a visit, not a show.”

This fast-moving production has nary a slow moment – and audience engagement with the material was palpable.

This “visit, not a show,” coupled with imaginative puppetry, finds echoes in Mr. Rogers, Shari Lewis, and The Great Pretender, whose playwright David West Read wanted to explore a type of children’s television that no longer really exists. The lead character, Roy (Steve Brady) plays “Mr. Felt” in a show targeted for preschoolers.

In the first minutes of the play we learn that Roy’s wife, Marilyn, has died. Since Marilyn controlled one of the show’s puppets, Francis, her death affects the show as well. How Roy, his director Tom, and remaining puppeteer Carol cope with this death, in a context of blurred personal and professional roles, is the focus of the show.

This production plays with the show-in-a-show device, revealing the set of children’s show nestled in a set showing the larger television studio. We see a modest divide between various roles played by each actor: Mr. Felt and Roy, the director and Tom, Carol the Pony and Carol. Playwright David West Read doesn’t torture this show-in-a-show idea; his characters are never too far from the roles they play in the children’s show.

This script is so strong, in part, because the playwright avoids the prescriptive; instead, he provides four rich characters with whom you genuinely want to spend time. No quick fixes to this grief. No one comes close to finding closure (that dreadful social worker word). However, their respect for each other affords great moments of comedy. This fast-moving production has nary a slow moment – and audience engagement with the material was palpable.

Steve Brady gives us a Roy with few boundaries between himself and Mr. Felt. When not playing Mr. Felt, Roy comes off with a bemused skepticism towards the others that doesn’t violate his Mr. Rogers-oid persona.

Michael Storm’s Tom is as conflicted in his romantic life as he about the future of the TV show. He’s been offered a chance to work on Dora-the-Explorer, but seems to recognize that moving forward with Dora would be acknowledging the unwanted death knell of a particular type of children’s programming. What little we know about his personal life is gleaned from his conversations with Carol.

Suzanne Grodner’s Carol is the polar opposite of Roy and Tom. Without her bombast (and that of Sarah Moser), the show would be numbingly soporific. She’s the most in touch – and articulate – about her feelings. Her actions demand a response.

Tom brought in Jodi (Sarah Moser) to voice Francis in the absence of Roy’s wife. Upon hearing her voice, Roy is weirdly confident about the success of this eccentric young woman, whose questionable taste in homemade pants has its own charm. However, Jodi is so good as Francis that her performance causes the characters to reevaluate the strategy of replacing Francis.

Together these characters take the audience on a gentle exploration of grief and moving forward with authenticity. Don’t brace yourself for a heavy-handed downer though, because the humor in this script is laugh-aloud funny.

The only nit in the program is the lack of resolution as to what happens with Jodi. While it’s clear her original purpose – a stand in for Francis – cannot go forward, we’ve spent so much time with this character, we need to know what happens to her.

The Great Pretender is a tantalizing kickoff to TheatreWorks’ 45th season. It runs through August 3 – and is immediately followed by the New Works festival.