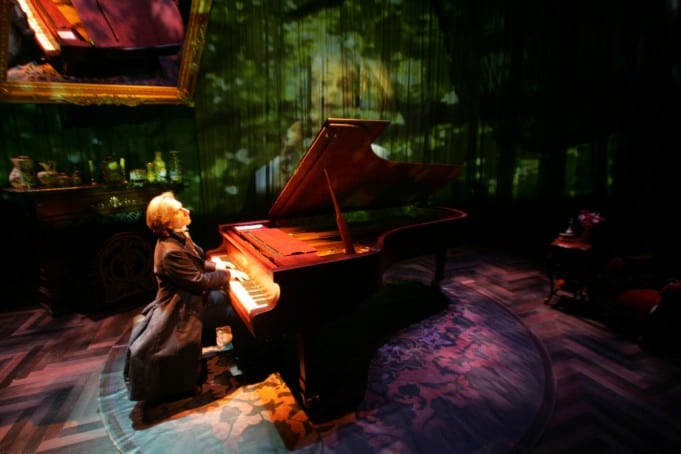 Hershey Felder has been in Berkeley a lot lately, which is a real boon for music lovers. While audiences sang along when he did George Gershwin, and positively kvelled when he took on Leonard Bernstein, neither of these performances prepared us for how completely he inhabited the persona of Fryderyk Chopin, in his current show, “Monsieur Chopin.”

Chopin’s dreamy, romantic music is often a bar against which some measure pianists. Mastering the etudes and preludes was once the province of only virtuoso musicians. Not so nowadays, when virtuosos are common, and having the Preludes under your belt is more a prerequisite and less a journey or destination. Fortunately, Felder’s interpretation of the evening’s polonaises, concertos, valses, preludes, mazurkas, and nocturnes was so nuanced that it makes such discussions trivial. His rendering of the second half of the first movement of Op. 35) made me even more convinced that its one of the sweetest pieces of Western music. This is the music that one goes home to, and few perform it with as much heart as Felder.

The emotional moment of this work is so distinct because, as Felder explains, it reflects not only his pianistic home (Chopin), but his artistic and real life home (Paris) and his own Polish background, as well. “Chopin is the angel of all pianists,” says Felder, “he really was able to take piano to new heights that hadn’t been seen before him. All these years later, we still strive to create the magic that he supposedly created at the instrument… it’s really ethereal, he really was the poet of the piano. And what is fun for me is to look into that life and try and see where such magic came from.”

As with Bernstein and Gershwin, “finding out where that magic came from” takes the form of a pianistic bio pic. However, unlike the others, doing Chopin required a lush dreamy set, redolent with rich drapery, a finely wrought fireplace grate, and candelabras – all framed by a gold proscenium arch that made it look like a 19th century oil color. Romanticism wends its way into the script, which revels in Chopin’s conflicting complexity, and provides a biographical sketch light years beyond the notes appearing in “Chopin-Schaum” books I and II – or the Bronislaw Sydow’s 1963 collection of Chopin’s letters, for that matter.  Looking at George Sand’s sketch of Chopin appearing in the frontispiece of that volume, I marvel how Felder the actor so became Chopin’s physical image. 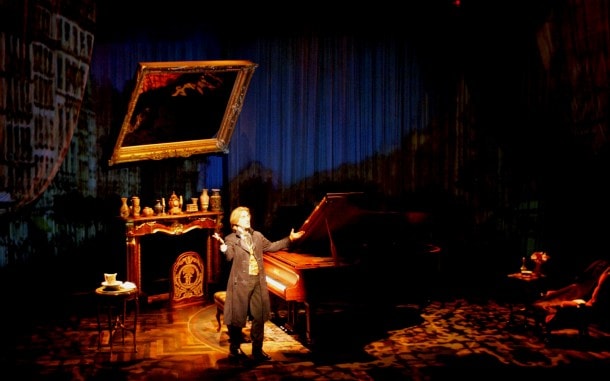 The evening became even warmer with the appearance of the Polish Consul General Mariusz Brymora, who presented Felder with the “Bene Merito” on behalf of the Polish government. According to the web site of the Polish Ministry of Foreign, Bene Merito is an “honorary distinction is conferred upon the citizens of the Republic of Poland and foreign nationals in recognition of their merits in promoting Poland abroad.”

Hopefully, the next step in this recent Hershey Felder love fest will be bringing Felder’s “Beethoven as I Knew Him” to the Bay Area. Moreover, may Mr. Felder start work on his second sonata soon…