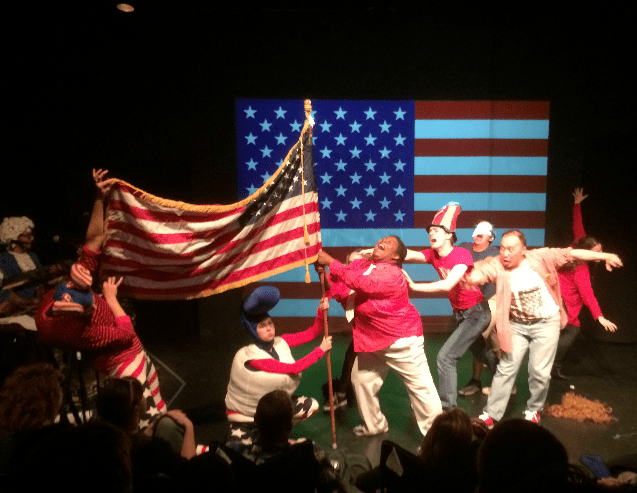 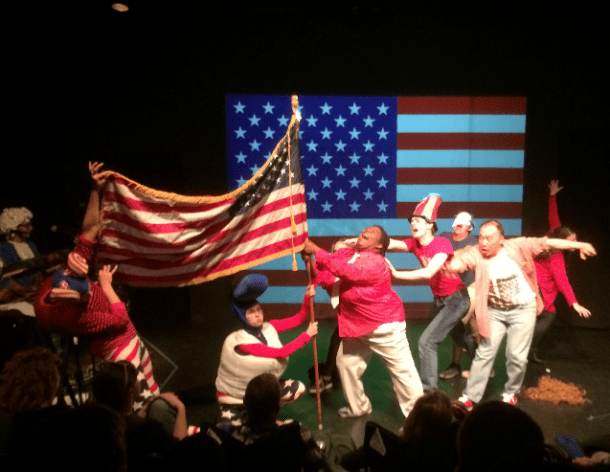 I caught the very last day of American Dream Cabaret. While the DREAM will be decidedly past tense by the time you eyeball this on your [insert device name here], the show and its progenitor, Mojo Theatre, still merit discussion. Shows like this speak to ticket prices, audience expectations, and why we go to theatre at all.

The local theatre ecology means that little theatre companies come and go like clouds scudding across a San Francisco sky. Such instability doesn’t necessarily correlate with the overall value; not only do such companies occasionally offer up some of the more vital and energetic work around, they also provide a window on homegrown theatre. While production values can be low and talent uneven, ticket prices aren’t as prohibitive as those commanded by first class theatres like ACT, Berkeley Rep, TheatreWorks and others. This means both audience and artists are free to take a gamble and experiment.

This affects how you see a work. While ticket prices aren’t inversely proportional to critical reception, they do relate to audience expectations. Production values may be low and casts relatively inexperienced – but that matches the expectations. Under these circumstances, other criteria become more prominent. What was the underlying intent? Did cast and crew deliver on that intent? Did they take the work (and the craft) seriously enough to maintain some artistic integrity, or was the delivery an insult to the audience?

This is a very long warm-up for Mojo Theatre. Chatting briefly with apprentice Olivia Benevidez before the show, I learned that Mojo was established in 2010 with an ensemble group of core actors forming the company. They do most of the heavy artistic lifting in Mojo Theatre productions, which alternate between cabaret-style events with what they call “text-based plays.”

Having survived their first four years in a difficult economic environment speaks to the tenacity of this ensemble. Working out of the historic Redstone Building in the Mission, their goal is to create a sociopolitical fusion. Viewed in a comic sense, they largely succeed.

American Dream is part of the Mojos “Partyiac Arrest” cabaret series. While the evening ran a bit long, it nonetheless moved quickly, as sketch comedy bits alternated with music and guest appearances. Editing is needed, as even a group that revels in self-indulgence still requires smart shaping. Likewise, the music needs to be tempered for the venue; loud music in a small space doesn’t fly if the audience can’t move and release the energy. These nits aside, the evening was redeemed by the talented cast and guests.

Having survived their first four years in a difficult economic environment speaks to the tenacity of this ensemble.

Mojos to keep your eye on include Michael Wu, whose physicality enhanced every scene he was in, and the high energy Nanette Ekua Morris-Dadzie, whose oversize personality and leadership were a joy to watch.

Other standouts of the evening were the Naked Empire Buffoon Company (Sabrina Wensky and Cara McClendon), who could give John Belushi’s killer bees a run for their money. These two combine the petulance of an ill-mannered child with the wiles of a Chechen terrorist – making one grateful they’re more extra terrestrially inclined. Likewise, Alison Kawa offered up a very tongue-in-cheek “There’s No Monkey Sex on American TV.

Rounding out the evening was a mini-trilogy by playwright and founder Peter Papadopolous who, among other things, brought a Monty Python vibe to sketch comedy bits of the founding fathers.

The continuing evolution of the Might Mojos and their guests will undoubtedly be as unpredictable as their material. For that alone, these guys are worth watching.