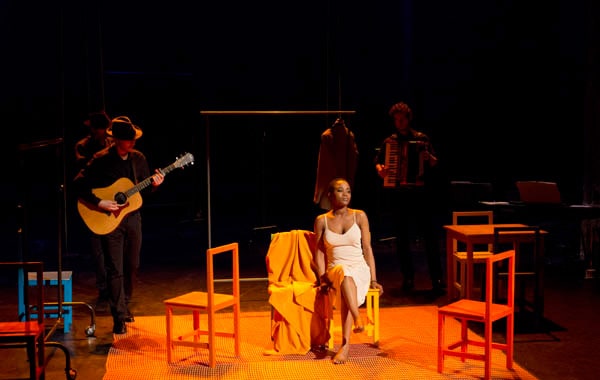 4 out of 5 stars - 'Smashing'
American Conservatory Theater
Direction, adaptation, and musical direction by Peter Brook, Marie-Helénè Estienne, and Franck Krawczyk
Based on "The Suit" by Can Themba, Mothobi Mutoutse, and Barney Simon
Review by Cy Ashley Webb

The Suit recalls Hannah Arendt’s aphorism that “without forgiveness, our capacity to act would, as it were, be confined to a single deed from which we could never recover.” However, in this instance, the act isn’t as much political as it is personal. Set in South Africa, this play is about love, forgiveness, apartheid, and fidelity. Much of the barebones plot focuses on deeds  from which the characters cannot recover.

This short drama, whose actors double as narrators, moving through a spare set, could be described as minimalist.  All too often, however, minimalism creates tedious art. However, good artists can distill an experience down to its essential elements to acutely focus attention on the actors and the script.

The Suit is Can Themba’s most famous story.

Such a distillation is precisely what happens on stage in The Suit. With nothing else to focus on, the audience response was palpable, as silence hung heavily while people tried to extract every nuance of what was happening on stage. This wasn’t so much the baited breath suspense we’re all familiar with, but a willingness to be emotionally porous to what was happening on stage. In part, this transformation of the audience evidences some of the mystery of Peter Brook’s stage direction.

The script was an adaptation of a short story by the same name by Can Themba, Thothobi Mutloatse and Barney Simon. Dan Rubin’s short bio of Can Themba captured some of the magic of being a Drum Boy, one of the young, intellectual, black writers for the paper of the same name in Johannesburg, whose writers became heroes as they wrote about apartheid. The Suit is Can Themba’s most famous story.

Enormous care was taken with this staging. Set pieces were few, but great attention went into precisely what they were, how they were used and how they were lit. Several seemingly random costume racks became windows, doors, suggestions of walls, and of course, a home for the omnipresent suit. A rug defined the performance space. A set of brightly colored wooden chairs and small table completed the mix.

The cast includes three actors (Jordan Barbour, Ivanno Jeremiah and Nonhlanhla Kheswa) balanced by three musicians. The leading male Ivanno Jeremiah is lean and angular with impossibly long legs. He plays Philemon, the perfect husband and attorney. Nonhianhla Kheswa plays Matilda, Philemon’s wife. Her lush, honey toned voice will wrap around you, luxurious as a fine fur Jordan Barbour plays Philemon’s friend Maphikela. Warmer than Philemon and rounded instead of angular, he’s the perfect foil. Within the first five minutes, the cast and musicians win the trust of the audience to take them on this play’s very unlikely journey.

“The Suit” feels incomplete, as if parts of Philamon still have to be released. He is so opaque, so self-controlled, that you know as much about him at the end of the play as you did in the beginning.  This opacity  is a strength as much as a weakness. This observation isn’t so much a criticism because remedying it in any substantive way would destroy the work; the incompleteness creates a tension, as you try to find who he really is.

While the play runs through May 18th, some nights look particularly intriguing. For example, following the May 2nd performance is a discussion about the behaviors of the characters, led by Mason Turner, MD, chief of psychiatry at the SF Kaiser. Other events can be found on the ACT web page.

ACT Artistic Director Carey Perloff writes that The Suit is magical in the most elemental and purely theatrical way. As she is about most things, her observation is spot on. This play will take you places. It’s well worth trying to take  in.