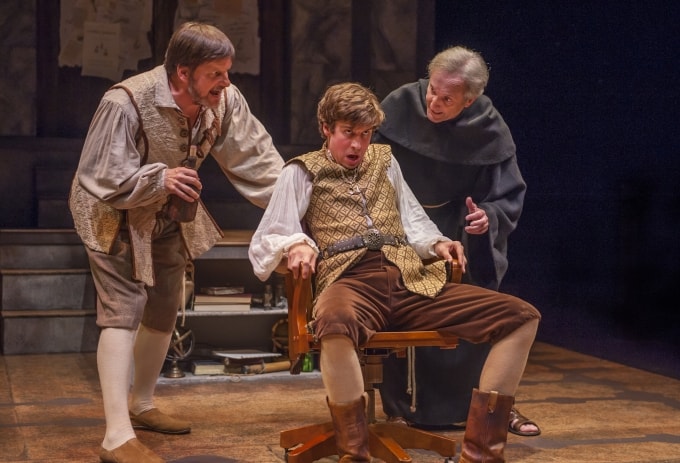 Martin Luther taught at Wittenberg University. Dr. Faustus took place there. Hamlet, as we see in Shakespeare’s Act I, Scene 2, wants to return there. In raising the possibility that these three cross paths in this “hotbed of iconoclastic unorthodox thought,” playwright David Davalos has created a clever comedy that just opened at the Aurora Theatre in Berkeley.

The success of this very funny play rests almost entirely upon Michael Stevenson (Faustus) and Dan Hiatt (Martin Luther). With Shakespearean-sounding language, interspersed with well-known quotes from the real thing, they try to persuade the young Hamlet (Jeremy Kahn) to take a side in a faith vs. reason debate, entrapping each other in the bargain to make for a surprising ending.

Don’t think for a minute that this is vaguely sophomoric undertaking. While some may find Wittenberg a little emotionally flat, it’s fast-paced dialogue is also incredibly funny. Moreover, Davalos has done his research, giving this implausible trio a surprising verisimilitude.

Physically Dan Hiatt is a note-perfect reformation churchman. His hooked nose and lean frame (think American Gothic) easily traverse the distance to Wittenberg where he taught theology at the newly founded university. He’s entirely plausible as straddles the divide between being an earnest representative of Christ and one who comes by his sarcasm and disappointment in the Church honestly.

Michael Stevenson gives a dynamite performance as the charming, good-looking alpha male who tries to dominate everyone he sees. In an interview with Robert Hurwitt, Davalos characterizes Faustus as a Renaissance Timothy Leary. If this is the case, Hiatt becomes the equivalent of G. Gordon Liddy. We watch these two battle wits on stage in a manner not entirely unlike Leary and Liddy on their campus tours with Liddy’s eye rolling exasperation met by Leary’s irrepressible bonhomie. Instead of Hamlet, who remains a bit player, Fautus’ indefatigable attempts to persuade Luther become the focus of much of the action.

At the heart of their debate lies the papal indulgences that Luther found so repugnant. Much dialogue is directed to his wrath at Johann Tetzel, seller of indulgences. Seeing an opening, Faustus uses this as a wedge to manipulate the elderly professor.

Elizabeth Carter plays a handful of smaller female roles, including a barmaid, courtesan, Virgin Mary and more. Whether she’s trying not to gloat too obviously over indulgences just purchased or rebuffing Fautus interest, she remains distinctly different in each role.

Plays like this keep one returning to the Aurora again and again. The Aurora excels at smart theatre that takes you out of your world without wasting your time – and to this end, Wittenberg is no exception.