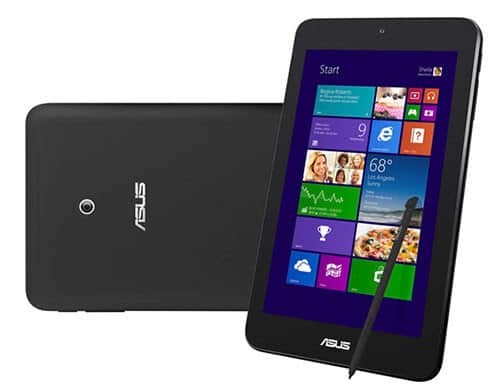 Asus is now taking pre-orders for its upcoming 8-inch Windows-based tablet. The VivoTab Note 8 starts at $329 (for 32GB), runs Windows 8.1, and is powered by the well-received Intel Atom quad-core Bay-Trail processor (Z3740). Display-wise things look decent: 8″ LED backlit IPS panel with multi-touch support. Many will lament that the resolution (1280×800) isn’t as good as, say, the (more expensive) Lenovo ThinkPad 8 tablet.

A few features in particular will be of interest for those in the market for a productivity tablet.

But the real standout feature could very well be the inclusion of a professional digitizer pen. Based on Wacom technology, the stylus reportedly slots neatly into a holder along the bottom of the tablet when not in use.

It seems as if 2014 could be the year of the 8-incher. Rumor has it that Google will soon release an Android-powered Nexus 8 tablet. And several other companies are working on new models or successors to existing ones.

Obvious competition include the Dell 8 Venue 8 Pro, the slick Lenovo IdeaTab Miix 2. So the Asus has some tempting alternatives. However, the addition of the Wacom digitizer could prove to make the VivoTab a favorite with those who need to write and/or draw notes.

Asus says the VivoTab Note 8 is available for pre-order now with pricing starting at $329 (US) for the 32GB model. Shipping begins March 23.

Your move Google (and LG?)…