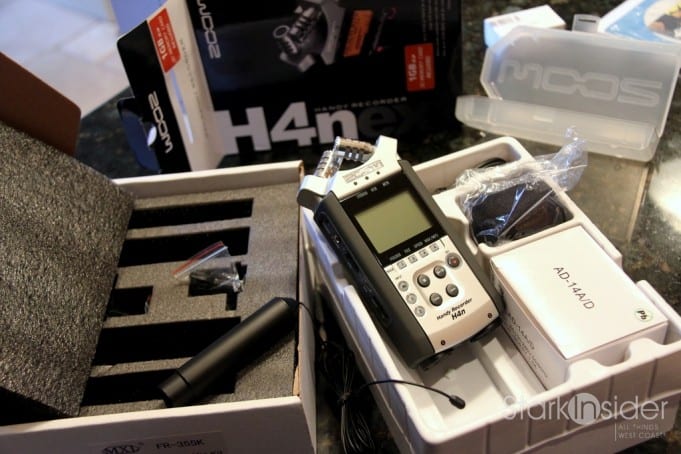 Sound is king. That’s the first thing I learned about at Loreto Film School.

After a grueling last week, spent in the classroom learning theory, and then in the hot Baja sun shooting projects for class, I still gave that some thought. I began to think of some of the classic films that I so loved.

Lawrence of Arabia. What would that film be like without the crescendo of that famously lush, stirring score as the camels trek across the desert?

The Godfather. What if Francis Ford Coppola used an in-camera mic on a GoPro to make that the 1972 classic (and best film of all time in my books)? It would look cool, extreme. Would probably go viral on YouTube. But the distinctive voices of Marlon Brando and Al Pacino would likely be drowned out by background noise.

Or Mulholland Drive. A modern classic. That’s a film as much about sound as it is an enigma.

Not that I make films for Stark Insider; a better comparison might be (disorganized) music videos or short run-n-gun and (also likely disorganized) documentaries. Still sound has been a big emphasis of mine for the past several years. Not only was that reinforced at Loreto Film School, but I was told by several local filmmakers a while back on Vimeo that to “take it to the next level” I would need to get serious about audio.

For a Hollywood blockbuster it could mean a team of 50-100 people dedicated to everything from production sound, sound effects, scoring, and the like. For an indie film it might just mean a guy with a boom pole and the director’s daughter as the field mixer.

For me, it meant taking the next step, a baby step. I went from using in-camera audio (shudder) to a dual sync setup. From that day forward I would always try to get a microphone, bet it a lavalier (lob), boom, or shotgun, as close to the subjects as possible.

I’ve got much to learn (it never ends!), but here’s the setup I currently use:

For under $500 I was able to give our audio a serious kick in the pants.

There’s still challenges. Obviously this isn’t the most high-end kit in the world. Background hum is always a challenge, especially around a lot of equipment, such as when we go backstage at some of the touring Broadway shows here in San Francisco. Also, because I’m not using XLR connectors (the H1s and Rode both use mini 3.5mm connectors) I’m several rungs away from the top of the quality pyramid. Still, the leap over in-camera audio is monumental. It’s doubtful you’ll lose viewers because of poor sound quality with this gear.

IF YOU GO TO LORETO

If you ever do find yourself in Loreto, Baja California Sur (Mexico) be sure to (1) do something on the water, the Sea of Cortez and the islands are stunning; (2) try out as many taco stands in town as possible – especially the pescado (fish) tacos; and (3) visit the Loreto Bay resort just 20 minutes south of town – there you’ll find an oasis of interesting village homes, a cool wine bar (that even carries NHL games no less, right in the middle of the desert!) and some amazing views of the Sierra de la Giganta mountain range.

Next, I started to read-up (and watch endless YouTube training videos) on how to use post-production techniques to improve audio. There’s a surprising of fixing and improvements that can be made after sound is recorded. So, in Premiere Pro I now spend at least an hour, usually more, tuning the audio levels, removing low end hum where possible (with a high pass filter), among other adjustments.

I’ve been spending more time now on soundtracks. I typically license tracks from The Music Bed. It’s not cheap. So pick and choose your moments.

Now that we’ve been generally working with clean production audio, and soundtracks that (hopefully) suit the material, I’ve more recently begun to focus on sound effects and accentuating certain audio in my edits. I’ve just started down this path, so it remains to be seen if the results will be any good.

For now, the best advice I’ve gotten when it comes to online video (or for that matter film or documentaries or music videos): sound is critical.  If you’re shooting DSLR video, I’d check out the Zoom field recorder range, and look at a quality shotgun. You won’t break the bank, but you’ll significantly up-level your quality. The result? Your more likely to retain viewer interest. There’s a ton of other variables, but if you have a grasp of sound, then you’re probably off to a good start. Sure, I’m not quite at the David Lynch or Paul Thomas Anderson level yet, but at least I can thank Loreto Film School and some friends on Vimeo for helping me at least attempt to get to second base when it comes to DSLR audio.

Canon EOS 70D. Lots of willingness from my wife Loni Stark to just do as I say, all in the name of art-house satire.

BACK IN THE DAY: “Kite Runner” (Before I used dual system audio)

Canon Vixia… and that’s about it.