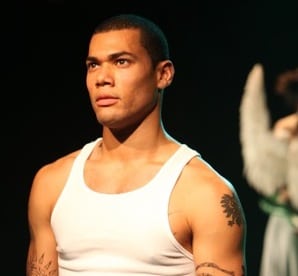 Great news out of San Francisco today on the theater front. Magic Theatre has announced that it and the Oregon Shakespeare Festival (OSF) have co-commissioned Luis Alfaro. The esteemed playwright will reportedly pen a three-play cycle about a Latino family in the United States.

Luis Afaro’s Oedipus el Rey was one of Stark Insider’s favorite moments in San Francisco theater of the last few years. In her review Loni Stark noted that Alfaro managed to transform “perceptions of the entire genre.”

Mr. Alfaro’s trilogy, currently titled This Golden State, will be developed in collaboration with both OSF and Magic Theatre. With ongoing support from the Andrew W. Mellon Foundation and a commissioning grant from the Wallace Alexander Gerbode Foundation, Magic Theatre has committed to producing the entire cycle of plays.

Magic Theatre’s Producing Artistic Director Loretta Greco said, “It is with great passion that we come together with our friends at OSF to celebrate a writer we have both heralded over the years and to support his next groundbreaking cycle of work. Our community was transported by Luis’ Oedipus el Rey and Bruja and looks forward to experiencing his one-of-a kind lens on America within This Golden State. This is probably an unprecedented collaboration between theaters of such varying size and I couldn’t be happier to be cross pollinating with such a spirit of possibility.”

OSF Artistic Director Bill Rauch agreed. “We are so proud to be in collaboration with our esteemed colleagues at the Magic to help our playwright-in-residence Luis Alfaro dive even more fully into creating this ambitious and hugely important trio of plays. Luis is a major American artist and arts leader, and we could not be more proud of the impact he is having on our campus through his residency.”

According to Mr. Alfaro, each part of This Golden State will examine a different “great American theme”—religion, politics, and identity—through the experiences of an extended Latino family with deep multi-generational roots in the Western United States.

“I really want to write about Latinos as Americans,” Mr. Alfaro said. “What does it mean to be ‘American’ for a family whose ancestors were indigenous to this land long before it was part of the United States? In a way, that’s the great American story.”

“I see this as one big American story told in three plays,” Mr. Alfaro continued. “It’s an ambitious idea that rises to the ambitions of these two outstanding American theatre companies.”

Mr. Alfaro is a critically-acclaimed writer/performer who has been working in theater, performance art, poetry and journalism since 1982. A multi-disciplined artist, he also works as a director, educator, curator, producer and community organizer. A Chicano born and raised in downtown Los Angeles, Mr. Alfaro is the recipient of a John D. and Catherine T. MacArthur Foundation fellowship, popularly known as a “genius grant,” awarded to people who have demonstrated expertise and exceptional creativity in their respective fields. He is the only playwright to receive two Kennedy Center Fund for New American Play awards in the same year (2002), and is the 2012 Joyce Foundation Award Fellow. He is currently serving as OSF’s first Resident Playwright as part of a three-year residency made possible by a $303,000 grant from the Performing Arts Program at The Andrew W. Mellon Foundation.

I think I speak for the entire Stark Insider team when I say: we can’t wait to see what Luis Afaro has in store.