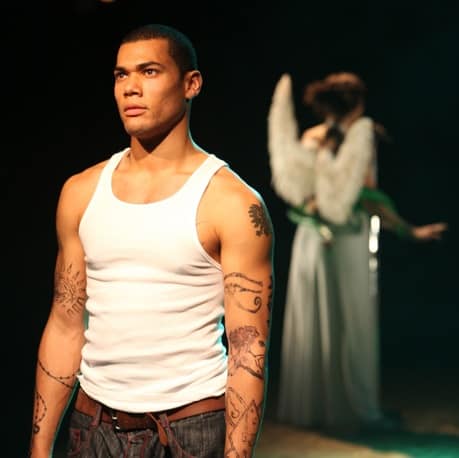 Sophocles’ Greek tragic tale of Oedipus, a man who dared believe he could steer his own fate against the curses of the Gods, has seeped into many literary works since it was first performed c. 429 BC. The timeless themes of fate and love are constructed in such a way that it remains eternally provocative.

However, the actual context of the play, the particular words, dress and music used to express the anger, despair and love that Oedipus experiences through the entire journey of man has become less accessible in today’s context. Until now.

Playwright Luis Alfaro, in his world premiere of Oedipus el Rey, has stripped away all the antiquated context the audience often has to intellectually peel away. Alfaro places the spirit, desire and virility of Oedipus in the modern context of a Latino barrio landscape and what he unleashes is the full poignancy of the story. The context has change and yet, at the end of the piece I felt closer to what the audience may have felt in c. 429 BC than any of the classic performances of Oedipus I have experienced. There was something profound at that moment to feel a glimmer of connection through common emotions and thoughts with strangers so distant in the past.

But let’s begin at the beginning of the story of Oedipus…Oedipus el Rey. Do you know him? Is he you?

The stage set is dark black, deep within the bowels of prison where we begin Oedipus’ journey. The set is minimal. The audience seating has been altered into a complete horseshoe shape.

It is the pulsating words spoken with a lyrical rhythm that mesmerizes me into a place of myth and fantasy. Like the relentless wheels of fate which drives Oedipus to his tragic end, so too does the momentum of Alfaro’s creation. Bound by a cohesive rhythm of words, actions and live music against a minimalist set, the play is powerful because of its vulnerability and honesty. This work is 90 minutes with no intermission which keeps this work tight like a rich shot of espresso.

Alfaro, in an interview, noted the first scene he wrote of the play was the meeting of Oedipus (Joshua Torrez) and Joscasta (Romi Dias) as he felt this was the emotional center of the play. I think it is this choice and understanding of the tragic core of the piece which made the emotional connection with me when I watch it. It is the love that makes us understand the pain. The actors fully embrace this aspect of the work and it was not in vain. Their love is cemented and then unraveled, and the audience feels what is there and its anguishing loss.

For anyone who thinks classic Greek tragedy is passé, Alfaro’s Oedipus el Rey will transform your perceptions of the entire genre and bring a deeper level of understanding to things you thought you already knew.