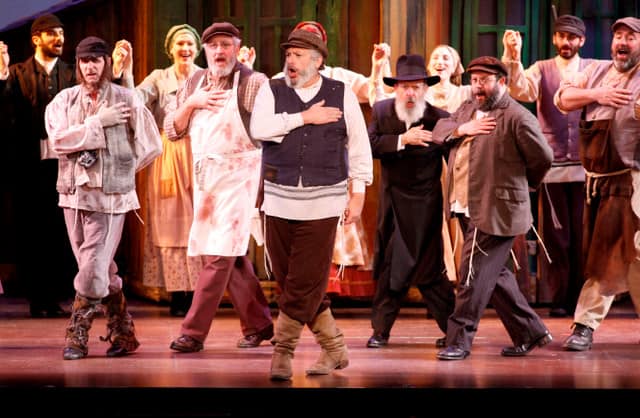 When Fiddler on the Roof (review from San Francisco), a musical adaptation of Sholem Aleichem’s Tevye stories, made its debut on Broadway in 1964 it was an immediate hit. With songs by Jerry Bock and Sheldon Harnick and choreography by Jerome Robbins, the play is among the most successful musicals of all time—with countless international productions in schools, community theaters, and professional stages from Korea to Finland.

Events taking place as part of Fiddler at 50 include a community sing-along led by monologist Josh Kornbluth, film screenings and stage performances, a concert and conversation with Theodore Bikel, and conferences and lectures with such renowned scholars as drama critic and Jewish historian Alisa Solomon.

Most events take place January 7–14, 2014. A special crowd-sourced video project called Break/Tradition is being created by 3200 Stories, an online publication of the JCCSF, together with The Contemporary Jewish Museum. The video will feature dozens of public submissions of individuals, families, and friends singing “Tradition” and will be screened at Fiddler at 50 events across the Bay Area. See below for all event details and dates.

Although the story of Fiddler on the Roof is based on the experience of Jews in rural Eastern Europe, its resonance goes far beyond the Jewish community, speaking powerfully of each culture and generation’s need to balance tradition with change, a tightrope act symbolized by the play’s title and central metaphor—a fiddler on the roof.

At the same time, some Jewish intellectuals saw the play (and the 1971 Hollywood adaptation, starring Israeli actor Chaim Topol) as a faulty interpretation of the much darker stories of Sholem Aleichem, portraying shtetl life in too sentimental or simplistic a light. Others, still unsure of the Jewish place in America, worried that the country would see Jewish life not as a modern, assimilated culture but as an exotic caricature dedicated to archaic traditions.

Fifty years later, Fiddler on the Roof is considered not just a work of genius, but a major text of post-war American Jewish life. The central conflict in the play—of balancing tradition with innovation, assimilation, and intermarriage—continues to haunt a Jewish community struggling to understand how to define Jewish identity in a land of unprecedented freedom and success.

The Contemporary Jewish Museum kicks off the Bay Area Fiddler at 50 celebration with a screening of the 1971 film adaptation, starring Israeli actor Chaim Topol as a Jewish peasant struggling with the meaning of tradition (181 min).

Keep the Fiddler fun going at this reception and dance party following the Community Sing-Along. Enjoy decadent desserts inspired by the old country from Kenny Hockert’s Old World Food Truck, and enjoy a live performance by Veretski Pass, a virtuoso trio that will be fiddling up a storm.

Enjoy an evening of music and conversation with legendary Jewish American folksinger Theodore Bikel, who has performed as Tevye more than 2,000 times, together with internationally acclaimed Bosnian accordionist Merima Ključo. The evening will include a conversion with Sam Norich, publisher of the Jewish Daily Forward

Fifty Years of Fiddler: A Conference and Celebration
Stanford University

Stanford’s Fifty Years of Fiddler Conference begins with this tribute to Fiddler on the Roof and Sholem Aleichem featuring a performance by Stanford’s oldest and largest theatrical organization, the Ram’s Head Theatrical Society, and a showing of the 2011 documentary Sholem Aleichem: Laughing in the Darkness, a riveting portrait of the great writer directed by Joseph Dorman.

Alisa Solomon, a professor at the Graduate School of Journalism, Columbia University, is the author of Wonder of Wonders: A Cultural History of Fiddler on the Roof and shares her perspective in this fascinating talk.

Drama critic and Jewish historian Alisa Solomon explains how Sholem Aleichem’s story of Tevye the Milkman was reborn as blockbuster entertainment and became a cultural touchstone for people all over the world. Solomon’s captivating new book, Wonder of Wonders: A Cultural History of Fiddler on the Roof, describes the enduring story of a Broadway musical that speaks to our deepest conflicts and desires—fraying traditions, generational tension, the loss of roots—resonating with people across borders and time.

Sonoma State University’s Departments of Music and Theatre Arts & Dance co-present Fiddler on the Roof, the awarding-winning Broadway musical that tells the story of a Jewish family clinging to its sacred traditions in the face of a rapidly changing world. Sonoma State University celebrates the fiftieth anniversary of this beloved, joyous celebration of the power of love and the triumph of the human spirit.