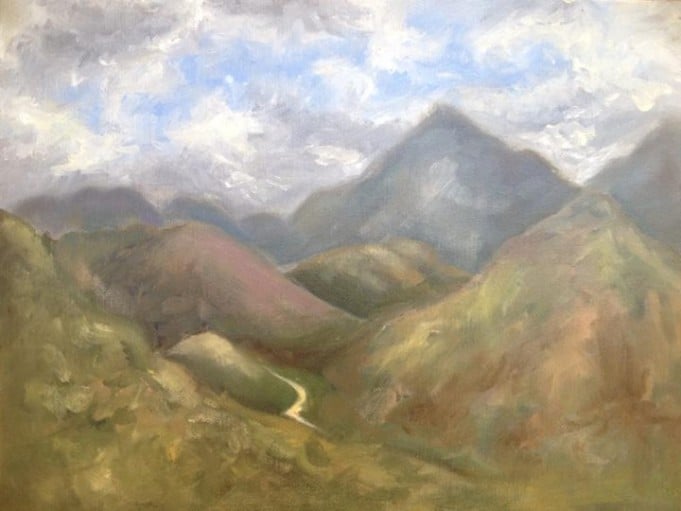 How do you know when to stop?

The question has been haunting me over the past few days as I try to complete a small oil painting of the Sierra de la Giganta mountain range. Landscapes here are incredibly beautiful and expansive. Opposite the mountains is the crystal blue Sea of Cortez. I brought a portable easel and some paints, and set up in the tower to for a plein air challenge. The first thing I learned: the wind will knock over your easel… multiple times… and usually knock the wet painting directly into the iPad you are holding, thus splashing paint on anything but the canvas. Oh, the drama.

I wasn’t happy with the initial results of this painting “Among Giants” – it was too drab, nothing popped. I mistakenly thought I had given the sky some drama, it just seemed like a bunch of blah, and the focal point wasn’t as compelling as I had hoped.

Even though I had declared the painting “finito” (and an abject failure) I found myself tweaking it here and there. I would sneak in a touch up at night, then again early in the morning. Soon, I was re-working various aspects. I added more color, used a less feathery brush, and tried to bring the mountains to life.

Am I done yet?

That is the question… when is a painting (or a book, or an article, or a song…) really, truly complete?

I find myself struggling with the idea.

I’m still unsure of whether this painting is complete as is, a disaster, or something that needs to be refined further.

Here’s a quick outtake from THE ARTIST DIARIES that Clinton Stark shot of me during a late night touch up session (basically my attempt to salvage the piece). Meantime my mind continues to play tricks on me; tortured soul and all!

WATCH: THE ARTIST DIARIES – “Among Giants”