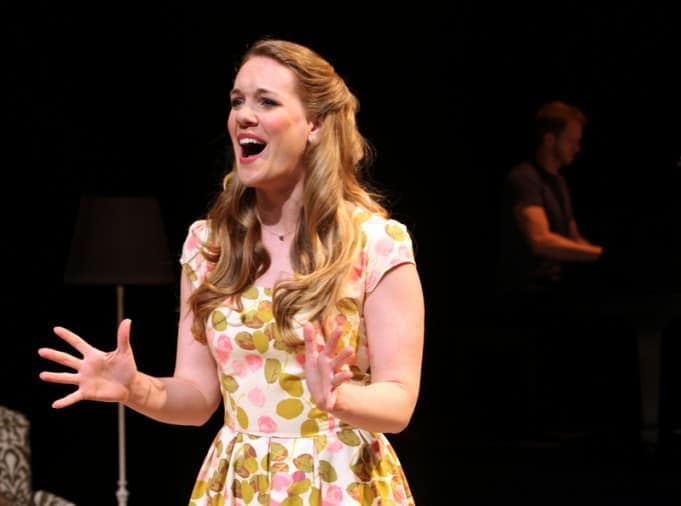 Arlington at Magic Theatre (San Francisco) opens with a thunderclap and rain. Initially, this is the sort of rainfall that comforts, but it grows more intense, threatening to split the heavens. These first five minutes presage what follows over the next hour.

Once the darkness of the storm abates, we meet Sara Jane (Analisa Leaming). Desperately upbeat, we see her fussing with her yellow flowers on her piano and readying her home for her mother’s arrival. Ditzy would be too cruel an adjective for this willfully unseeing girl-child who bats about cheerful irrelevancies about chard and flowers and chocolate and sunblock. Ten minutes into it, I start looking for some tension to animate this thing. The tension arrives, as Sara Jane drinks a glass of wine left by her mother and pours herself a shot of Jim Beam from a bottle left by her husband Jerry, a soldier in an unnamed desert war.

Leaming creates that most unlikely of characters: someone you don’t necessarily like, but to whom you want to be exquisitely kind. Sara Jane is funny and more vulnerable than any adult has a right to be. She even gets in a few zingers of her own about her mother’s plastic surgery (aka “P.S.”) and her husband’s sexuality (“voracious”).

Her entire role is sung, and we see her singing the way some of us write: tentatively, figuring the world out, one word at a time. One senses that if she were to stop singing, she’d stop existing, unable to feel her way forward in the dark. Her accompanist, Jeff Pew, plays down stage, occasionally getting in his two cents of commentary as her husband and father. Leaming doesn’t stop singing for an entire hour, bringing incredible focus and concentration to her performance, which feels more like an unembellished operetta than a musical. Composer Polly Pen’s music is interesting by itself, following Sara Jane’s unexpected twists and turns.

The catch here is that the entire work has an unfinished quality. We learn that Sara Jane is pregnant and worried about what the violence of war is doing to her husband. The production ends suddenly after one of the most moving songs, sung with a breathtaking delicacy. (“When the moon’s in the house. I can never fall asleep.”), There is no more to this beautifully executed production, which ends just as soon as you get engaged with it. In that sense, it’s more like a snapshot than a play. More time needs to be taken to develop this work and to bring it to a proper resolution. Doing so would give this work the honor it deserves.