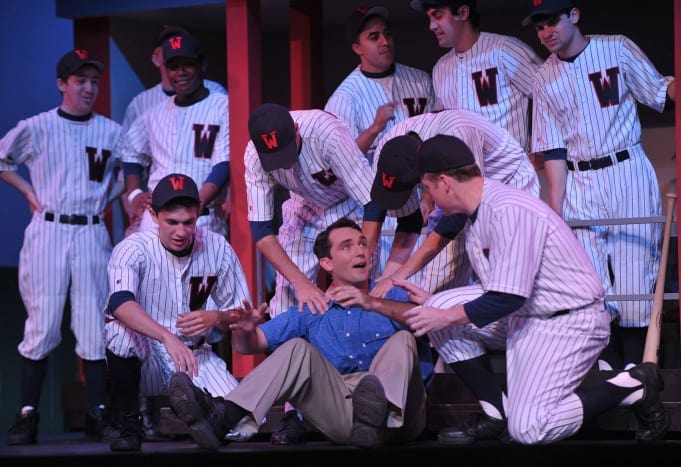 One of the delights of summer is a wealth of good, cheap theatre. This summer, the pickings are more numerous than the tomatoes from my garden; on the Peninsula, the best of the batch may just be Damn Yankees, which opened at the Smithwick last week.

The production remains stuck in my head for many reasons, not the least of which being that the original 1955 show was choreographed by Bob Fosse. More importantly, the show reminded me of what’s been absent from stages everywhere for decades: big dance numbers with nothing but men. Think of the sailers in South Pacific belting out “There Ain’t Nothing Like a Dame.” Think of the men in Fiddler on the Roof, singing “L’Chaim.” For a number eliminated from the original Broadway production, think of “Fie on Goodness, Fie” from Camelot, which Bill English recently reintroduced in his current production at SF Playhouse.

Watching Van Buren  & Ballplayers in Damn Yankees belt out “Heart” and “The Game” made me realize that I’d been missing this old style male dance routine for far too long. I’m hard pressed to think of any contemporary equivalent; everything seems too precious, too ironic, or too campy. The characters in these numbers are absolutely guileless gents. Even the “Fie on Goodness” chaps aren’t exactly going to turn tables and morph into investment bankers on the sly. On their own terms, these are the most reasonable of men, in a very Henry Higgins kind of way.

Both the female ensemble, made up of the friends and associates of baseball widow Meg, and the male ensemble, made up of players for the Washington Senators, were uniformly excellent. Enormous care was taken with the smaller roles so that Holly Smolik brought a delight burst of energy  as Sister Miller, and  Richard Lewis brought depth and wisdom to his role as Benny Van Buren. Jeff Clarke brought a delicious panache to the  satanic role of Applegate (an appellation that pre-dated Watergate, and the thousand and one other “gates”). Principals Daniel Mitchell (Joe Hardy) and  Mary Melnick (Meg) make their demanding vocal roles seem effortless.

ALSO SEE: The Most Congenial Spot: ‘Camelot’ at SF Playhouse

Foothill is among the crown jewels in California’s community college system – and its theatre department is far better than that of many four year schools. As their summer offering, Damn Yankees makes a delightful night out. The entertaining musical will be at the Smithwick through August 18th.