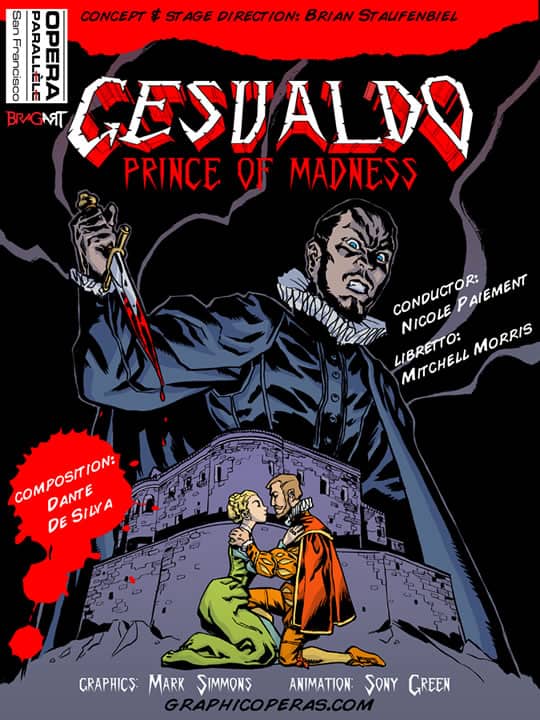 The vitality of the opera scene in San Francisco is an amazing thing. Whereas classical music tends to draw the geriatric and near-geriatric (a condition that gets worse the further down the peninsula you go), opera continues to be a big draw, even for twenty and thirty-somethings. Part of this can be attributed to the enticing marketing outreach by the SF Opera, but part can be attributed to the edgy works produced by Opera Parallèle.

Opera Parallèle invited the public in to share this work-in-progress. This was not the first opera made from Gesualdo’s dramatic story, but it is first attend to include a comic book projections from the same. Tricked out in the style of a Marvel comic and projected on the wall, the comic series provides all the sex and violence that don’t quite make it to the real stage.

While the comic book approach might seem a little gimmicky, it is very effective, particularly in guiding audience members who are unfamiliar with the story. It certainly beats subtitles as a narrative aide.

The theorbo, a lute-like instrument commonly used by the Philharmonia Baroque Orchestra, was incorporated to highlight Gesualdo’s role as a compositor. Like the comic book approach, this too can be construed as gimmicky, as the music itself is not Renaissance or baroque. I suspect however, the theorbo will work better when the work is fully orchestrated.

The performance itself, was quite extraordinary. Daniel Cilli delivers an animated performance as Gesualdo. His strong baritone takes on an eerie cast when he sings out of his normal registers at the end. Michelle Rice, as his murdered wife Maria, brings a wounded remorse to the role that is positively palpable in every note she sings.

Since this was a work-in-progress, I’m reluctant to take a critical approach to this material. It remains unclear when Opera Parallèle will present this composition, as composer Dante DiSilva noted that much work is still required. However, their very willingness to share such works, and introduce new means of presentation explains why the opera community in the bay area remains so vibrant.