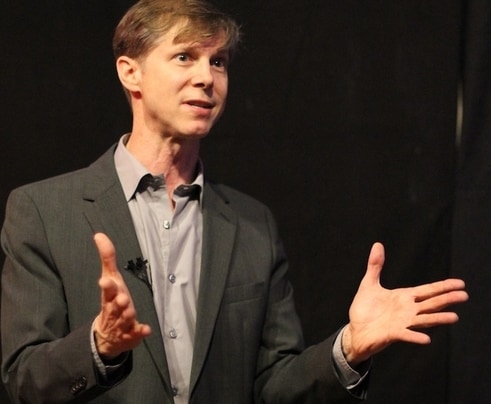 Steve Seabrook: Better Than You

Steve Seabrook, motivational speaker, is a creation of Kurt Bodden. His Steve Seabrook: Better Than You was held over again at The Marsh San Francisco, where Boden’s been providing a comic facsimile of a safe, nurturing place of empowerment since the show opened in February 22, 2013.

This long-running show suggests that Bodden is doing something right. However, he’s so become the motivational speaker that he skewers, one wonders whether Seabrook has taken him hostage. The soporific smiling character Bodden’s created is so lacking in tension that it suffers from all the defects of the real thing.

In short, Bodden’s too darn good at what he does.

Perhaps Better Than You has caused him to become better than Bodden. It’s almost like watching an Elvis impersonator turn into an Elvis tribute artist.

Bodden is smart enough to introduce breaks where Seabrook chats on his cell phone with his colleague “the dating whisperer,” and exchanges pleasantries the lighting guy. These moments provide relief from the motivational speaker gig. However, they’re over all too soon as Seabrook dons his jacket, just so he can take it off again, for a show of canned informality, not unlike Mr. Rogers changing into a sweater.

If riffing off of motivational speakers isn’t your cup of tea and any version of safe, nurturing place of empowerment makes you itchy, there’s other interesting things happening at The Marsh.

Don Reed – whose stellar performance was the crown jewel of the Marsh’s winter holiday show  – is previewing “Can You Dig it?” When Reed opens his heart he lets the whole world in, so I’m looking forward to catching this one. If you want more, Safiya Martinez  just opened “So You Can Hear Me,”  a self-described “love letter to New York and voices from its public schools.”  Since Martinez’ show may be the closest I get to going home this summer, so I hope to check it out next week.