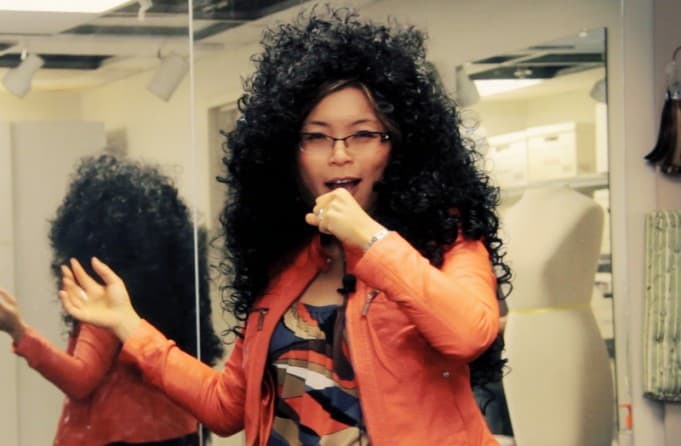 The firsts keep on coming here at Stark Insider. Last week Loni got her inner zombie on and chomped a limb in what could be one of the most gruesome segments Team Stark has ever shot, Twizzlers and all.

Now Loni heads to the San Jose Rep where she encounters a caffeine-fueled director who describes the interview process with her as “torture.” Then later: “brutal.”

Here’s your chance to see the rare outtakes. We’ll be taking them down soon so watch them while you can. The final cut which should come out next week–and features never before seen footage of the costume shop at the Rep–will be cleaned up, re-edited, hopefully lessening the psychological damage incurred by all involved.

As if that wasn’t crazy enough, Loni took the opportunity to showcase her Cher impression to the world. The results were… Well, the results were… interesting. Watch for yourself:

Clinton Stark says he likes to put Loni in a Cher wig every now and then “so people don’t confuse Stark Insider with KQED and NPR.”

I’m not so sure it’s necessary, but one supposes every little bit helps.

Stay tuned for the full interview for A Minister’s Wife which opens soon at San Jose Repertory Theatre.