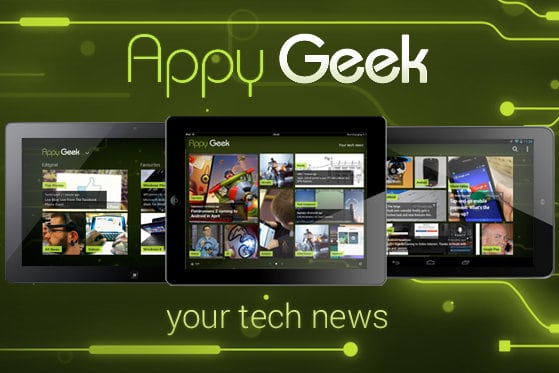 Appy Geek continues to be one of our go-to apps for all things tech. It sources a decent array of content (300 news sources) and renders stories well on a variety of devices. My one beef–the lack of large screen appeal–has now been rectified in the latest release.

According to the developer, Mobiles Republic, the new version of Appy Geek now features larger images and is ideally formatted for large screen devices, specifically tablets.

Interestingly readers ultimately chose the final design, in what proved to be an interesting use of crowd sourcing to shape the end product. Still, customization (aka “personalization”) options are available. Users can place and size news channels on the home screen.

Best of all, Appy Geek does not simply re-purpose RSS feeds. Instead the app pulls complete articles from some of our favorite tech sources–The Verge, Engadget, SlashGear–without the need to click through to a separate browser window. Thumbs up on that feature.

Android, iPad, and Windows 8 tablets are supported with the new release, which is available in eight global editions, and five languages (English, French, German, Italian and Spanish).

If you’re a tech news hound than Appy Geek is definitely worth a download, and joins the ranks of Flipboard, Pulse (now owned by LinkedIn), News360, and Taptu as some of Stark Insider’s favorite news aggregation and discovery apps. You can download now at Google Play, the App Store and the Windows Store.