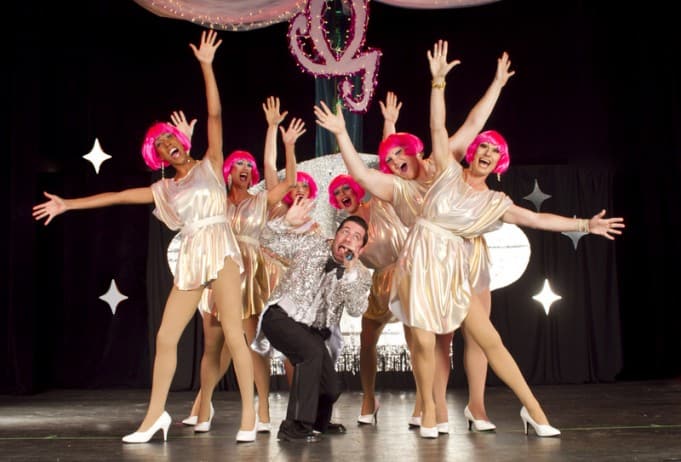 Sometimes a night at the theatre is simply about having a good time – which is where Pageant – The Musical! succeeds. While one could do a very academic bit on drag in Shakespeare or drag in Greek theatre, such feeble stabs at intelligence would miss the point entirely. Pageant – The Musical!, which originally opened off-Broadway in 1991, is currently at the Victoria Theatre. Throughout the course of the evening, emcee Frankie Cavalier (Manuel Caneri) puts a bevy of belles through their paces as they compete for the title of Miss Glamouresse.

While Cavalier’s claim that every one of the contestants is “a natural-born female” carries about as much weight as Joel Grey’s claim about the girls of the Kit Kat Klub (“each and every one a virgin”), these girls do their own particular charm.

The self-effacing, appeasing smile of Miss Deep South (Jon Deline) is instantly recognizable as the quintessential southern girl, despite the pantyhose sagging around her ankles. The insecurity of Miss Great Plains (Daft-ee Gesuntheit!) is mirrored on half the faces of 1970’s sitcom maidens – and half the my high school classmates.

Other characters are so over the top that they’re less recognizable. Blond “Miss Bible Belt,” (Aaron Brewer) who spreads the gospel through telemarketing and banks on Jesus, is all in the eyes and the way she flips her hair. Miss Industrial Northeast (Cookie Dough),  “who has not enjoyed the luxury of a formal education” is all in the teeth and tongue. Miss Texas (Tim Hormsley), who works with the beauty-impaired, is all in her horsy smile. Miss West Coast (Maurice Andrew San-Chez) is an unlikely combination of restraint and new age flightiness.

Pageant provides a whole new take on girl power. The evening culminates with the crowning of Miss Glamouresse by a group of judges selected from the audience.

The only downside to Pageant – The Musical! is the poor sound quality of the Victoria Theatre. This was aggravated by problems with the mic that left me feeling that I was missing all of Cavalier’s funniest lines.  These small issues aside, this show is worth catching before it closes on March 9th.