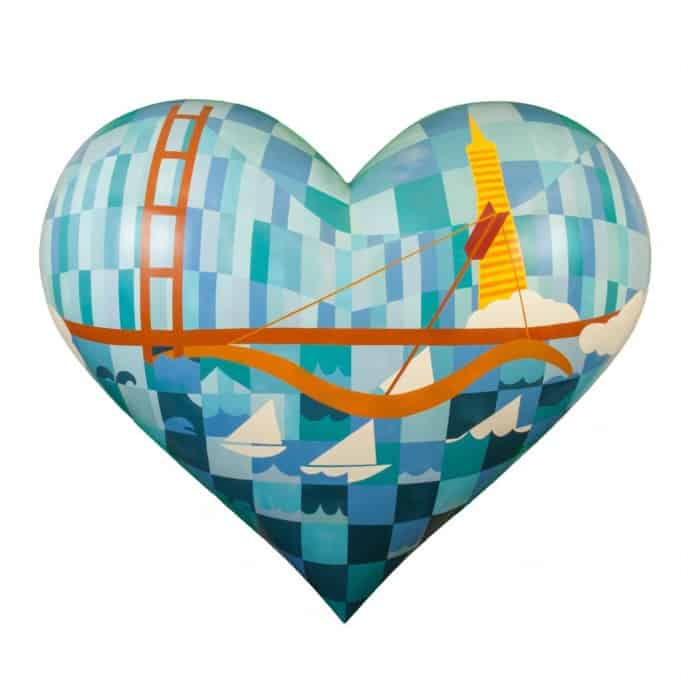 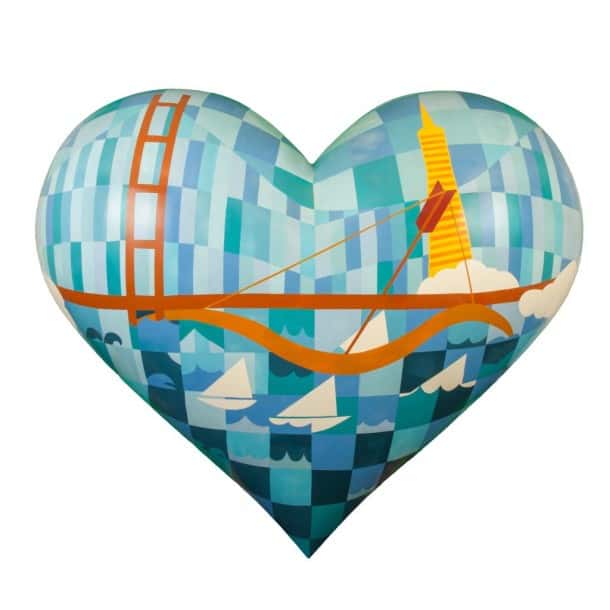 Their hearts will be auctioned and sold during the luncheon, which, in 2013, will include a live auction for the table-top heart, “Heart of a Giant.” Select large hearts may remain on display in San Francisco’s Union Square. Hearts in San Francisco artworks combined with Heroes & Hearts and Hearts After Dark proceeds (2006 – 2012) have raised more than $8.5 million for SFGHF.

“The thirteen hearts for 2013 are particularly special because in their own way, they each represent the City of San Francisco and the diverse community that the San Francisco General Hospital and Trauma Center serves,” says SFGHF Executive Director Stephanie Bray. “Not only are these hearts important to the art community and the City, but they will raise much needed funds, which support the vital programs at The General.”

The 2013 Heroes & Hearts Luncheon takes place on February 14 at AT&T Park. Tickets for the event range in price from $300 for single seats to $5,000 for event sponsorship.

Heroes & Hearts: About the Artists

LINDA ADREVENO – This is the third heart that San Francisco native, Linda Adreveno has created for the San Francisco General Hospital Foundation. She is an abstract painter specializing in mixed media.  Her sources of inspiration are nature and the objects of everyday life.  As a native San Franciscan she is also influenced by the sights and sounds of the city.  At her studio in Hunters Point she explores new ways to use simple materials to create paintings, sculptures, and collages. Her work has been shown at Johansson Projects, Oakland, CA; Richeson Gallery, Kimberly, WI; Texas State University, San Marcos, TX; and other locations throughout the United States. Her heart, “Bound” is a true representation of San Francisco, with the 49 True Lover’s knots that signify a city of forty-nine square miles, bound by water on three sides, with a rich maritime history.

SHAY DAVIS – Shay Davis, born and raised in Denver, began his career at the age of five with an early interest in sports and superheroes. He went on to earn a Fine Arts degree from the University of Colorado.  Davis has won numerous awards including being a gold medalist in the prestigious Art Show in 1992. His original works are in the collections of actresses Halle Berry and Jayne Seymour, athletes such as Tony Hawk, Bill Garnett, and Koy Detmer, as well as music legend Gregg Allman. His heart “SF’s Bounty” illustrates San Francisco as a rich city; rich in weather, culture, business, history, visual vibrancy, and growth.

PERE GIFRE – San Francisco based artist, Pere Gifre, is an industrial designer and conceptual artist, who specializes in VFX design and development for sculpture, sceneography and motion pictures. Gifre’s projects, both personal as well as those developed in collaboration with other artists, have been published both nationally and internationally. Publications include Wired magazine, El Innovation, MoMa magazine, The New York Times,The Guardian, The Daily Telegraph, Domus, Creative Review, BBC News, Vision Innovation magazine, Plastykiartbooks, Artfutura magazine and Bonart. All of these publications have emphasized the artist’s talent for innovation in his projects. With his heart, “Beat to Bit” Gifre has created an interactive sculpture that expresses the characteristics of San Francisco: open minded and tolerant to any race, sex, religion, culture, economic status or political ideology. Gifre has created the first sculpture in the world with interactive color Quick Response (QR) codes, with are able to be accessed through a QR readers on nearly any device.

SAUL LEVY – This isn’t the first time Saul Levy created a heart for San Francisco General Hospital Foundation. Levy is a long-time resident of San Francisco, living in the Haight Ashbury neighborhood for 30 years. A graduate from Dartmouth College, Levy has become a “jack of all trades.” He was a professional ski instructor, plays the ukulele, guitar, and violin. Levy’s main art medium is watercolor and paints primarily landscapes and landmarks of San Francisco. Many of his art pieces can be seen at AT&T Park.

JUDITH LIPPE – Judith Lippe moved to the Bay Area 35 years ago after she studied painting and sculpture at Brooklyn College, Brooklyn Museum Art School. After beginning her career as a painter, she moved onto sculpting. It was with those skills that she returned to school and trained in Interior Architectural Design. The day Lippe submitted her application for Heroes & Hearts 2013, she received word that her 103 year-old mother had passed. After she received the heart, she created “City By The Bay” in her mother’s honor, who was also an artist.

TRINH MAI – Trinh Mai born in Harrisburg, Pennsylvania in 1978, three years after her family fled Vietnam during the fall of Saigon. In 1979, her family relocated to the San Francisco Bay Area, where she was raised.  In 2004, Mai graduated from San Jose State University with a Bachelor of Fine Arts degree in Pictorial Art and since then have continued to exhibit nationally with representation reaching from San Francisco to Naples, Florida. She also attended the School of Art and Architecture at the University of California Los Angeles, where she further explored her passion for painting. Trinh’s heart “Looking into the Future and Remembering the Past” commemorates San Francisco’s Chinatown, the starting point and home for thousands of Chinese immigrants.

SHILO RATNER – Shilo Ratner has lived and worked in the Bay Area since 2003. Her abstracted figurative gestures contemplate the psychological perplexities of self identity. Her work has been exhibited in galleries and festivals which include African American Culture Complex, Los Angeles Art Association, First Street Gallery NYC and Hang Art Gallery. In addition to creating art in her studio, Ratner is a fine art painting instructor who teaches abstract theory and technique. Ratner holds a BA from Curry College and a MFA from the Academy of Art University San Francisco.

BETSY L. WOLFF – Betsy L. Wolff is a California native and local artist, who has lived and worked in and around San Francisco for many years, and now lives in Pacifica, California. She works with abstract images, using mixed media and acrylic paints as the base, but also works in oil pant and other media, and occasionally dabbles in illustration. While her subject matter and media change, she is always concerned with color and gesture, and usually with conveying movement in the static surface of the panel or canvas. She received her bachelor’s degree from U.C. Berkeley, with a major in Humanities with an emphasis on Art and Art History. She has works in many private collections, and has exhibited in and around the Bay Area, primarily in Pacifica, where she has exhibited at the Sanchez Art Center, the Pacifica Library and the Mildred Owen Concert Hall.

WENDY GOLD –Wendy Gold holds a Bachelor of Industrial Arts from San Francisco State University, and has been a Decorative Artist in the Bay Area since 1995. Her first venture into alternative canvases began in 2001 with Art de Toilette™. She quickly gained notoriety by transforming toilet seats from a basic utility to a prized made-to-order work of art. Always compelled by canvases with inherent commentary, Wendy launched ImagineNations™ in 2010. With vintage globes as her canvas, and recycled materials decoupaged on them, each globe is a beautifully unique world. Wendy has been featured on CNN, Newsweek, USA Today, InStyle, Travel+Leisure and hundreds of other local, national and international media outlets. Her high profile clientele includes a roster of A-list celebrities, such as Billie Joe Armstrong and actors Sean Penn and Jude Law, along with world-renowned restaurants, hotels, and boutiques.

NATALIE GUY – Natalie Guy graduated from Winchester School of Art in 1999 and has enjoyed creating many wonderful works of art both locally and internationally ever since. Based on the South Coast of the United Kingdom, Guy has worked on public, private, community and charity commissions. Natalie has created “Kimeta Heart”, where she decorated the heart with mini white clay hearts and asked children from a local hospital in the UK to adhere the hearts to the 17” x 14.23” x 8” heart. Previously, Natalie created a piece for the London Elephant Parade, followed by two hornbill birds for the Jungle City charitable event in Edinburgh and then submitted two meter high eggs for the Faberge Easter Egg Hunt in London. All of these projects have raised more than $100k for charity in the last 3 years. 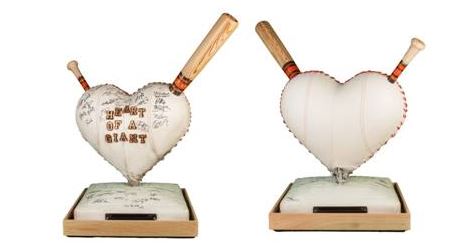 BRIT HOWARD – Artist Brit Howard studied at the Academy of Art University in San Francisco, where she received her BA in Sculpture and Printmaking.  As a long-time resident of San Francisco, baseball fan, and professional artist, Brit was inspired by the remarkable energy and sense of city pride when the Giants won the World Series in 2010. Her heart, 17” wide by 14.23” and 8”thick “Heart of a Giant” replicates the concept of an arrow piercing a heart using a baseball, bat and a home plate. The heart features autographs from members of the 2012 World Series Champion team and 2010 winners.

ROBERT KNIGHT – Robert Knight has been working as an artist in the Bay Area for nearly 30 years, ever since he graduated from San Jose State University with a degree in Sculpture. Having exhibited his work throughout California, Knight also taught at his alma mater and is a part of the Silicon Valley Artists Collaborative. His heart “Anguished Heart #2” depicts wooden steaks protruding from the table top heart.

MARYANN KOSHIYAMA – Mixed-Media, Painter, Collage and Mosaic Artist, Mary-Ann Koshiyama thinks of herself as a Gypsy artist. She prefers to use found and recycled materials and items that others often overlook. Koshiyama loves to put secret meanings and symbols within her creations, many of them reoccurring themes: hearts, stars, love, peace, and unity. After graduating Cum Laude from De Anza College with a degree in Graphic Design, her artwork has been showcased in a number of places over the years, including winning First Place in the Touch My Heart Art Show in 2009. Her heart, “One Love” expresses her belief that hearts unite people and that the shape is a very sacred image.