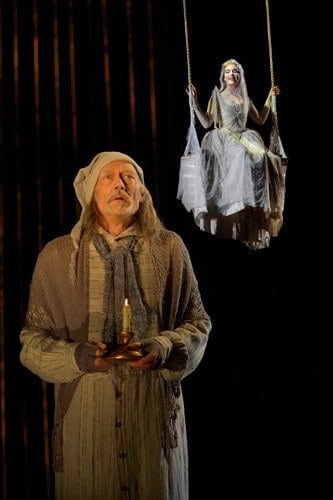 A Christmas Carol isn’t exactly going to provide any surprises. Whether in miserly or munificent form, Scrooge will always be asserting his dominance, Bob Cratchit will always be modestly earnest, Tiny Tim will always be winsome and the Fezziwigs will always be such Victorian caricatures that they’re worth a chuckle. This sameness isn’t a bad thing because it binds us to our traditions and lets us know from whence we came, even the facts of the matter have gotten blurry over time.

All of this begs the question: why would a reasonable adult shell out for a show that suffers such sameness, except perhaps to bring up a youngster in the tradition? Herein lies the answer, because this shockingly powerful production by American Conservatory Theater (A.C.T.) of A Christmas Carol will make you laugh and cry throughout the entire play. What made this production so truly astounding is worth a moment’s thought.

This production didn’t become engaging by changing elements of the story. We’ve all seen various attempts struggle to inject novelty into traditional entertainment (tap dancing Nutcracker, anyone?) in an attempt to prevent it from becoming a warmed up version of itself. A.C.T. takes a pass on this technique, and focuses instead on offering up a truly excellent production and letting the excellence sell the product. This excellence is why Carol has been going strong at ACT every December for the past 35 years.

So if the only out-of-the-ordinary part of A.C.T.’s production was its extraordinary excellence, it must be noted that this extraordinariness extended to casting, acting, costumes, the lighting design, and the sets. While we expect an excellent Scrooge (which James Carpenter handily delivers), we don’t necessarily expect the high humor to come from Scrooge’s maidservant, Mrs. Dilber (Sharon Lockwood). Combine that with a positively electric Ghost of Marley (Ken Ruta) and a drop-dead sexy collection of ghosts (including Rebekah Brockman and Omoze Idehenreon), and you have A Christmas Carol with staying power. 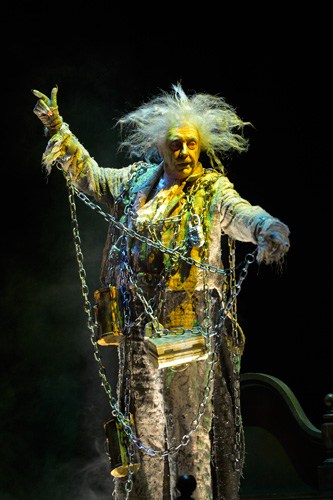 Children were seamlessly integrated into the cast. Insofar as it carries more of an expectation of “child” and less of “actor, the phrase “child actor” sounds suspiciously like “student athlete,” which carries more of “athlete” and less of “student.” However, here the A.C.T. training is evident, as the children are downright cunning as Spanish Onions, Turkish Figs and French Plums. Louey Kehoe’s measured performance as the Boy Scrooge was particularly noteworthy as it didn’t rely on the maudlin to pull the heartstrings.

A Christmas Carol will be running through December 24th.  You don’t need to have a child in hand to enjoy this one.