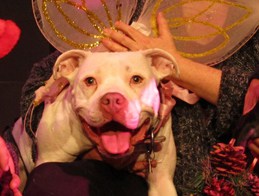 Like emcee Josh Kornbluth, I come from a people who don’t do well at unabashed joy. My idea of holiday success is making latkes that don’t decompose in the frying pan. However after last night’s event at the Marsh, I’ll be dropping notes into the suggestion box at work that my employer get Josh Kornbluth to emcee their next event, Wavy Gravy to deliver the benediction, Sarah Felder to juggle in Yiddish and Artistic Director and founder Stephanie Weissman to make the kugel (more about these kugel later…).

The heart of the evening was with Wavy Gravy; he was the only one who offered up what was the most appropriate response to a day marked by the horrors in Connecticut. After singing the old Incredible String Band ditty “may the long time sun shine upon them / pure love surround them / And the pure light within them / guide their way home,” he cited Gurdieff for the proposition that prayers don’t work unless repeated three times, and had the audiences singing the same. Without even mentioning the Sandy Hook Elementary School, he brought what we were all weeping about front and center.

In addition to Mr. Gravy, the evening’s entertainment included Ron Jones, Charlie Varon, Wayne Harris, Ram Dass (channeled by Warren David Keith,) and Don Reed. Most of these folks had shows at the Marsh or were just about to, which convinced me I have to be spending more time at the Berkeley Marsh.

But most of all, the evening felt like a night with dear friends, which is why I suspect artistic director Stephanie Weisman spent the day making kugel. I ended up hitting the freeway this rainy night largely to find out more about the 144 homemade kugels mentioned in the press release. Were these like the potato kugel I make every Passover, or were they like the obscenely high-fat lokshen (noodle) kugel I make year round? Maybe they’d be desert apple matzah kugels? Why kugel at all?  And why, for the love of God, why 144 of them? Was kugel consciousness a new disorder to be listed in the DSM-5?

Weissman’s kugel magic (tiny portions of very sweet apple-cinnamon lokshen kugel) set the stage for a wonderfully haimish Berkeley evening. With upcoming shows by Charlie Varon, Brian Copeland, Kurt Bode and Will Durst, I look forward to the Berkeley Marsh shortly. This might be one of the best new venues in quite some time.