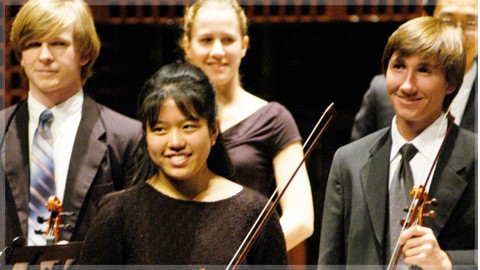 El Salón Mexico is a perfect piece to start a concert – especially one performed by a youth orchestra just after Día de los Muertos. But this wasn’t just any youth orchestra… Given that it was the San Francisco Symphony Youth Orchestra (SFSYO), the performance was vibrant, energetic, and better than many adult orchestras.

In writing El Salón Mexico, Copland straddled two competing musical worlds – that of a temporarily vanishing modernist school and the briefly popular social realist one. Unlike many of his friends at the Group Theatre, Copland avoided the dreariness of social realism while remaining sympathetic to its underlying motivations. Thus, remarking on the source of inspiration during a 1932 trip to Mexico, he could write “I realized that it would be foolish of me to attempt to translate some of the more profound sides of Mexico into musical sounds – the ancient civilizations, or the revolutionary Mexico of our own time – for that, one really had to know a country well. But my thoughts kept returning to that dance hall.” In this deliciously colorful piece, Copland brings together threads of very recognizable Mexican dances from that dance hall, heightening their impact. He describes it best, saying “before the final climax I present the folk tunes simultaneously in their original keys and rhythms. The result is a kind of polytonality that achieves the frenetic whirl I had in mind before the end when all is resolved with a plain unadorned triad.”

One suspects that Copland would have relished the treatment this piece was given by the SFSYO, not the least because the “frenetic whirl” is exuberantly performed by the pulsating violins, searing brass, majestic woodwinds, and booming timpani. While I could talk about how the continually changing time signatures were navigated seamlessly, that would be entirely beside the point. From the opening repeated triad, these young people brought this piece alive with remarkable zest and panache.

Mozart’s Oboe Concerto in C major followed. Like El Salón Mexico, this is a youthful piece, which overflows the brim with Mozart’s usual happy ornamentation and mapcap flourishes, which means that soloist Liam Boisset had his work cut out for him. Boisset tendered a performance that became more fluid and supple with every passing measure, as he threw off riffs picked up by the orchestra, and vice versa. His performance started on a high note and by the third movement, his masterful  phrasing and dynamics were clearly evident as clusters of notes burbled out as effortlessly as a bubbling spring.

My personal favorite was Sibelius’s Symphony No. 1. Comparing this work with Sibelius’ later symphonies would sound like damning with faint praise. However, that’s just plain unfair because this work stands on its own quite admirably. The performance of the long clarinet solo begins the first movement sounded better than the recording I’d been listening to, if only because the delivery was slower and phrasing more nuanced. The third movement delivered by the SFSYO had such a big romantic feel that it provided a glimmer into why Sibelius would much later be called the Beethoven of Finland.

The SFSYO never ceases to astound me, as I look forward to their Fall and Spring concerts. Just recently back from a European tour, these talented musicians, aged 12 – 21,  hold their own with the best of them. They’re our best insurance that this music remains alive and vital.