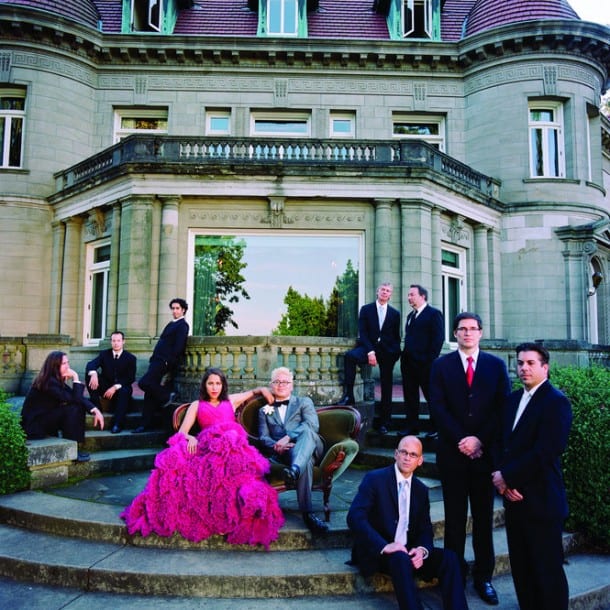 Thomas Lauderdale says that the music of Pink Martini is to help people fall in love, get divorced, have a baby, or vacuum. They make music so beautiful and smart that it cuts straight through the intellectual chatter. If the Stark Insider motto is “twice as fun, half as smart,” Pink Martini’s is “smart enough to be twice as fun.” Pink Martini makes it smart, sexy and safe to be out having a fabulous time without worrying that you’re turning into someone of a dubious political persuasion. Somehow all of this explains why three quarters of Davies Symphony Hall was dancing in their seats.

Several months back rumors were circulating that China Forbes returned to the stage after a hiatus during which her throat healed. Between her effortless voice, shoes with more glitter than her jewelry, purple gown, and insouciant pout, Forbes was in top form.

After opening with something equally inflected with salsa, bossa nova and kletzmer, Forbes  performed the honey toned Amado Mio with a voice powerful enough to stand up to both the San Francisco Symphony and the Pink Martini “little orchestra.” How that girl renders a version of “Little Drummer Boy” that brings tears to the eyes is one of the great mysteries of the musical world. She just kept pumping it out until before intermission when the band proffered a piece with  solos by Nicolas Crosa on violin, Dan Faehle on guitar, and Gavin Bondy on trumpet that was so breathtaking that even conductor Donato Cabrera stepped back to applaud.

The return of Ms. Forbes would have been cause enough for celebrating, but that was just the beginning. Band leader Thomas Lauderdale opened the stage to a special guest, Norman Leyden. The 95-year-old Leyden has done everything, been everywhere, played with everyone of note, and if he hasn’t played with them, he conducted them, composed for them or arranged their music. You need less than six degrees of separation to connect with Norman Leyden because his reach includes Glenn Miller, Ezio Pinza, Frank Sinatra, Tony Bennett, Disney, Arthur Godfrey, the Oregon Symphony Pops … as well as a lesser-known sax player, my cousin Stanley Webb.

However, those credentials weren’t what melted the collective heart of the audience. Mr. Leyden’s smile alone would have sufficed. The magic started when he raised his clarinet to his lips. If clarinet were a religion, Mr. Leyden won more converts than any evangelical. His performance makes you want to jump all over Thomas Lauderdale in gratitude for bringing Leyden to the stage. My expectation that Ari Shapiro (as he did at the two previous concerts at Davies) might appear seemed pale indeed, but exceeding expectations seems to come easily for Pink Martini.

The good energy just kept coming,with the audience forming an en mass congo line that snaked into the lobby at the close of the evening. There’s no other band today that generates that sort of open hearted good will. While some musicians make the world a little bit better, only Pink Martini leaves them in a congo line out the door.