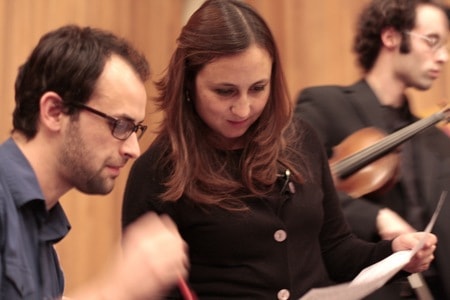 Berkeley Symphony announced the selections for its 2012–13 ‘Under Construction Composers Program,’ designed as an opportunity for Bay Area emerging composers to work with a professional orchestra.

Three selected composers—Andrew Ly, Michael Nicholas and Davide Verotta—will each write a symphonic work to be read and performed by Berkeley Symphony at the Under Construction New Music Concerts on December 9, 2012 and March 24, 2013, at the Crowden Music Center in Berkeley. Music Director Joana Carneiro and Music Alive Composer-in-Residence Steven Stucky will curate the concerts.

Andrew Vi-Luan Ly is a current Ph.D. student in Music Composition at UC Berkeley. He holds a B.A. in Music from Yale University, where he was awarded the Southeast Asia Studies Summer Fellowship and Richter Summer Fellowship for the study of traditional music in Vietnam. He also holds an M.M. in Music Composition from the University of Southern California. Andrew is the recipient of numerous awards including the 2007 Critical Language Scholarship from the U.S. Department of State and the 2007 Chinese Cultural Scholarship awarded by the Chinese government for a one year study at the Shanghai Conservatory of Music. In addition to his studies in composition, Andrew also performs as a baritone with the San Francisco Choral Artists.

Michael Nicholas is also a current Ph.D. student in Music Composition at UC Berkeley. Originally from Los Angeles, Michael earned a B.A. in composition from the University of Music and Performing Arts in Graz, Austria, and an M.A. in composition from the Academy of Performing Arts in Prague, Czech Republic. He also studied at the renowned Rimsky Korsakov St. Petersburg State Conservatory in Russia where he took a preparatory course from the department of composition. In 2005, he won First Prize in Composition at the 15th Internationale Sommerakademie PragWienBudapest in Reichenau, Austria, for his work titled Zephyr. (www.michael-nicholas.net)

Davide Verotta attended the Milano Conservatory in Italy before moving to San Francisco to pursue his studies. After changing his academic focus to mathematics, he earned a Ph.D. in Biostatistics at UC Berkeley, before returning to his musical studies at the San Francisco Conservatory of Music. He earned his M.A. in composition from San Francisco State University. His piano teachers include Isabella Zielonka, Robert Helps and Julian White; composition teachers include Carlos-Sanchez Gutierrez, Richard Festinger, Ronald Calabiano, Josh Levine, Kurt Rohde, and Laurie San Martin. He currently studies with Allan Crossman in Oakland. (www.davideverotta.com)

Berkeley Symphony’s Under Construction Composers Program offers a rare and invaluable opportunity for emerging composers to further develop their skills and gain practical experience in writing for a professional orchestra. During the yearlong program, each selected composer will workshop and complete one large symphonic work to be presented at the two Under Construction New Music Concerts. They will regularly meet with composers Steven Stucky and Paul Dresher in private and small group sessions, receive feedback and orchestration lessons from Music Director Joana Carneiro and guest composers, as well as participate in workshops led by key orchestra members. They will chronicle their experiences and the growth of their pieces at the Under Construction Composers blog at underconstructioncomposers.wordpress.com. Each composer will also receive a CD of the performance for their personal and non-commercial use.