The Greater Good, or the Last Election 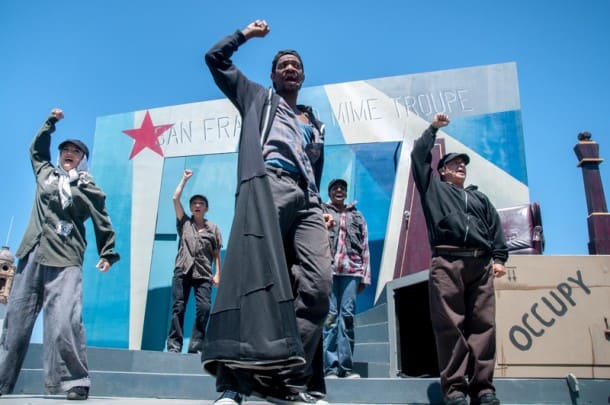 Another summer finds the San Francisco Mime Troupe (SFMT) wending its way to a park near you. Their usual route hasn’t changed too much:  San Francisco, Glen Park, Palo Alto, Yerba Buena Gardens, Santa Cruz, Oakland, Berkeley, Richmond, Monclair, and more. Their truck with its signal red star pulls in, the stage unfolds, and the band cranks it out… just like they’ve been doing since 1959.

The staying power of the SFMT is admirable. They were here before Jon Stewart. They were here before Rush Limbaugh. They were waving the populist banner before the tea partiers decided that they were the true populists, albeit brought to you by the Koch brothers. Over the years they’ve gotten darn good at what they do. However critical of their politics you might be, the bottom line is that they remain stellar performing artists. With impeccable timing, costuming, acting, blocking, etc. – these guys just can’t be faulted. Spending a little time at any of their shows easily explains their Tony’s, their Obies, and their awards from the San Francisco Bay Area Theatre Critics Circle.

Their current production, For the Greater Good, or The Last Election, speaks to the usual issues of class warfare, racism, media manipulation, deregulation, and bank fraud. Will big banker Gideon Bloodgood’s (Ed Holmes) theft of Capt. Fairweather’s funds be revealed? Will Bloodgood’s rich-girl daughter Alida (aka Tonya) sell out her comrades in the 99%?  Will Lucy Fairweather (Velma Brown) wise up and stop being a capitalist tool? Will Lucy’s mother (Keiko Shomosato Carreiro) remain strong in the Occupy encampment?  Will Jack Badger (Victor Toman) succeed in blackmailing Bloodgood? Lastly, what really happened to the evidence?

This plays well to the legion of SFMT fans who boo, hiss, and applaud from their seats. While it’s easy to criticize the SFMT as being predictable, the bottom line is that they’re no less predictable than anything on the idiot box – and appreciably more funny.  Unlike the media clowns of either stripe that spew the pre-digested pablum, the SFMT isn’t guzzling at the corporate trough to bring you their message. While the Jon Stewart and Sean Hannity’s call to action is nothing more than a call to buy their sponsor’s products, the SFMT are invested in a real call to action.

“For the Greater Good” will be in the Bay Area parks until September 9th. After that, we can look forward to the SFMT’s “Christmas Carol,” which opens later this year. As his recent production of “Julius Caesar” at the Afro-American Shakespeare Company demonstrates, Sullivan excels at re-imagining classics. In the hands of the San Francisco Mime Troupe, this production promises to be unlike any other.