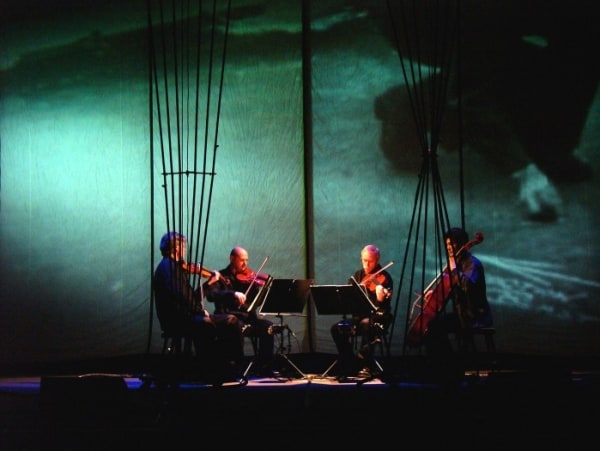 The Kronos Quartet never ceases to blow my mind because their work is so widely disparate. Every CD has pieces I detest, and pieces that remain my go-to music. Tonight’s concert was no different. The only commonality shared by these pieces was they were composed by women. Among them were pieces I immediately went out and bought, pieces I dug for their performance value (but would never make the transition off stage), and others that I’ll happily never hear again. No other group delivers such a disparate program – which makes their concerts always worth checking out. On the off chance it is not entirely obviously, their performances are some of the best new music around.

The evening began with Nicole Lizee’s “Death to Kosmisch.” Lizee writes that this work reflects her “fascination with the notion of musical hauntology and the residential perception of music.” Her explanation goes on, but I think you get my drift: this music has the feel of being a purely intellectual construct. The mish-mosh of collected sounds (which include various hand held games, LP scratches, etc) was aggravating to hear. The performance felt more like a conversation that one anxiously tries to escape.

Flow, by Laurie Anderson, was the polar opposite of Death to Kosmisch. Even on CD, this piece is an exquisite little gem that so effectively holds you in its grasp that you don’t realize where it’s taken you until the music comes to an end. As a performance piece, Flow comes into its own and positively shimmers, much like the edges of a Rothko painting. The long rests between the short musical gestures give the listener breathing space, which is a rarity in any concert hall. It has the feel of the first measures of Ives’ Unanswered Questions. Unlike other attempts to achieve a similar effect, this piece leaves you hankering for more.

Mosaic was an assemblage of music from the late musique concrète composer Delia Derbyshire. I confess, I was unfamiliar with Derbyshire, in part because my understanding of musique concrète never really made it past the infamous Beatles Number Nine. Here the usual lifts from radio and turntable static, combined with other sounds, were pieced to a traditional, rhythmically pulsating melody which carried the work forward. While I can’t speak to the quality of the underlying pieces, they were so effectively strung together that the piece didn’t suffer from  fragmentation as suggested by the title Mosaic.

The center of gravity of the evening was Van-Ahn’ Vo’s All Clear. This lengthy, serious piece went to the heart of the Vietnamese experience of the war. Designed as a performance piece, this piece integrated visual, olfactory, and audial elements. Every physical motion was carefully calculated, be it the descending of the gongs, the pace of the musicians from instrument to instrument, the removal of a shawl, or the speed at which the incense burned. While the many elements of this were interesting to watch, the entire piece could have been better paced. Parts leading up to the crescendo stomping of bamboo into the ground was intensely moving. While the parts after this crescendo were interesting, they could have been better integrated into the whole.

After intermission, the Kronos Quartet was joined by Inuit throat-singer Tanya Tagaq for a piece written by Derek Clarke titled Tundra Songs. This fundamentally hopeful piece speaks to the Arctic seasons. Tagaq produces a startling series of rhythmic sounds, upon which are overlaid bird calls, caribou hooves, and the call of nature. This piece brought the audience out of the crisis created by All Clear, with it’s cutting gestures from the US national anthem and bugle call of Taps. Here the only limitation was the elements. It was the perfect place to end the evening.

I’d be remiss if I didn’t mention the subtle lighting effects that moved the entire evening forward. Enormous changes occurred so slowly that I could barely detect them. However, the lighting created one new world after another, matching the musical pyrotechnics perfectly.

I’ll be queuing up next time the group is in town. In the meantime, I put my son on notice that the group visits Royce Hall at UCLA regularly. Kronos Quartet is not to be missed.