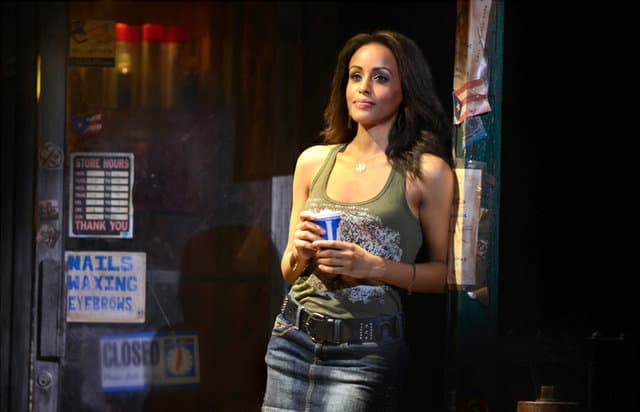 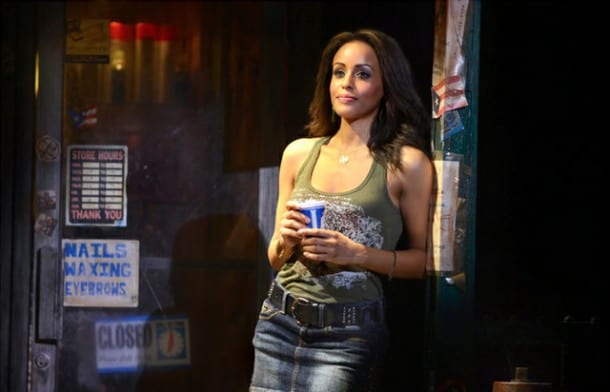 In the Heights invites inevitable comparison to West Side Story. Both musicals have spellbinding choreography;  both focus upon life in Latino neighborhoods in Manhattan. While the story line of In the Heights is nowhere as hackneyed as West Side Story, the plot has its limits. As New York Times critic Charles Isherwood noted, In the Heights “is basically a salsa-flavored soap opera, and if there is an equivalent of schmaltz in Spanish, this musical is happily swimming in it.” That said, both West Side Story and In the Heights overcome this deficit so handily, that to suggest that either play lacks versimilitude is to miss the point all together.

The show just opened in San Jose, and is well worth seeing. I’d be hard-pressed to distinguish this non-Equity touring version from the Equity version that blew through San Francisco two years ago. Both productions have the same  impeccably-crafted set with bodega storefront, limo service, and hair salon that make the Dominican neighborhood seem positively haimish. More importantly, both have the same high-energy dancers that command attention throughout the show with both whimsy and drop-dead cool moves. Each dancer is fascinating to watch individually as well as in ensemble. Since so much of the show is dance, you don’t have to worry that you might miss something if you choose to let your gaze linger on an individual pair of dancers.

More than anything, In the Heights is about dreams and possibility.

Unlike the Equity version, the show-stopper in this production was Benjamin Perez, who played Kevin Rosario. Theatre that stays with you invariably has at least one actor with such compassion and understanding of his character that he completely inhabits it. Others may be darn good and exquisitely skilled, but you sense that they’re merely acting. Not so with Perez. Playing the father of Nina, the neighborhood girl who left the Heights only to falter during her first term at Stanford, Perez so embodies the awkward relationship of parent and young adult that I was not the only person in the audience tearing up over his version of “Inutil” (Useless) in which he reflects that his inability to solve Nina’s issue was not dissimilar from his own father’s limitations.

If Perez embodied the warm heart of the production, Presilah Nunez, embodied the cool. Playing Vanessa, her impossibly long legs, and remote chill made her seem already out of the Heights – except for the small matter of limited finances that keep her tied there. Nunez was fascinating to watch as she wended her way among the denizens of the barrio, as if she was no longer .

More than anything, In the Heights is about dreams and possibility. It can shake you out of your election year doldrums and bring you to your senses. This might be the best thing I’ve seen in San Jose so far this year.