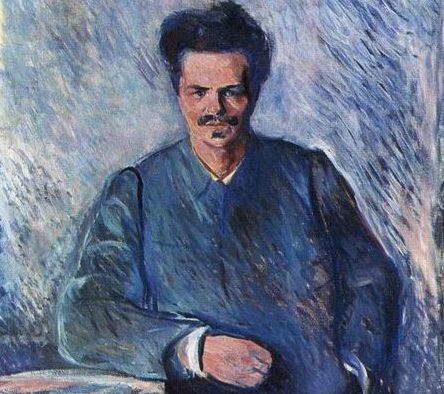 Cutting Ball Theater concludes its “Hidden Classics” series with The Keys To Heaven, part of the company’s celebration of August Strindberg’s centennial.

In the play, the death of a man’s three children from the plague causes him to go on a surreal journey to the afterworld. His travels take him to the ruins of the tower of Babel, Jacob’s Ladder, and the Gate of Heaven. Along the way, he meets Romeo and Juliet, Tom Thumb, Don Quixote, Bluebeard, Hamlet, and Ophelia. One of Strindberg’s most peculiar and rarely performed plays, The Keys To Heaven was never performed during the playwright’s lifetime. Robert Estes helms the production.

While August Strindberg is credited with being one of the three pioneers of realism in the theater along with Chekhov and Ibsen, he is decisively the precursor of expressionism both in theater and painting. We’re told the Cutting Ball reading will be followed by a discussion of the play and Strindberg’s influence on expressionism.

Cutting Ball’s Hidden Classics Reading Series — no doubt inspired by the artist himself — explores and celebrates the works of August Strindberg. The series offers a look at one of the greatest authors ever to write for the stage in a program that continues to be one of San Francisco’s best-kept secrets. The company will produce all five of Strindberg’s Chamber Plays, in new translations by Paul Walsh, in fall of 2012, the first time all five of Strindberg’s Chamber Plays will be performed together in repertory in any language.