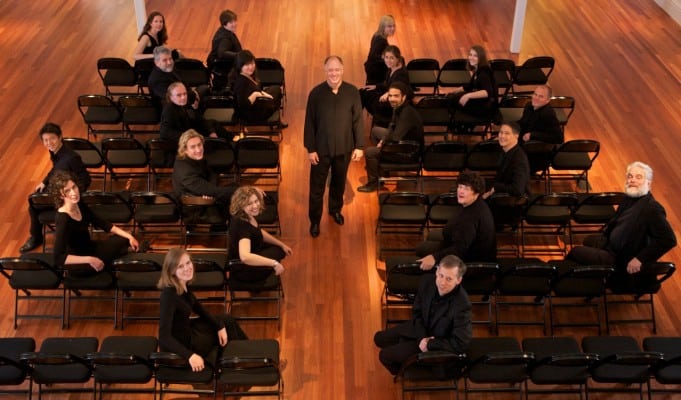 “Songs With(out) Words is the very apt title of Volti’s new program. Under the direction of the charismatic Robert Geary, this group goes places that seem inconceivable for a choral group. Whether they are singing with or without words, their technical brilliance, poetry, and modernism is startling.

The evening opened with a new work by John Muehleisen, especially commissioned by Volti, that was based upon four poems by Gertrude Stein. Muehleisen, who was in the audience, pointed out that Picasso’s subject matter – portraits and still lives – was often fairly conventional. Insofar as they adopted the same subject matter and subjected it to a new form, Stein did with language what Picasso did with art. These four poems reflect this, as they include three portraits and one still live.

Vocally, Volti’s 20 singers take these poems to the very edges of tonal expression with exceptional musicality. Most surprising was their treatment of the poem “A Portrait of One Harry Phelan Gibb.” The motivic language of the poem insistently propels the work forward, but Volti takes it in an altogether different direction by slowing it down, which causes the audience to linger more on the meaning, than the rythmn.

The Stein poems were following by “White Key,” written by the Poet Laureate of California, Carol Muske-Dukes. An ambitious work, this was the longest piece in the program.  The composer Reena Esmail relied upon odd harmonies that almost never resolved.  At times, I thought I detected the occasional use of hawkit, as musical thoughts started with one group of vocalists and ended surprisingly with others.  This served the poem well, mirroring line breaks. This tight relationship between musicality and language of the poem continued throughout this work, such as the explosive hiss to the word “shut.”

The latter half of the concert was devoted to “The Homecoming,” which had been commissioned by Chanticleer in 2008. This piece opened with the irregular tinkling of a bell.  Voices arose disquietly, held the notes, and let the sound decay.  This piece was one of my favorites of the evening, in part because the last stanza so perfectly describes Volti:

The babes from whose mouths

Shall pour forth the words

That quench the fire

And set you free

And call you home.

The last piece of the evening was perhaps the most striking, as it emphasized what this group does without words. Deconstructing a very short Philippine text (in a manner not entirely dissimilar to what Stein does with language), voices take on the sound of everything from gongs to gamelans to percussion sticks. The program thoughtfully included a page of Robin Estrada’s score. Although the piece was appeared to be in 4/4, traditional accenting conventions were dispensed with, giving every note, it’s own weight.

Volti will be at Song Gathering: The Fifth Annual Festival of New Music for Treble Voices in Palo Alto on March 10th. Their next concert, Pathways, Floods and Delusions, will be in the Bay Area in early May.