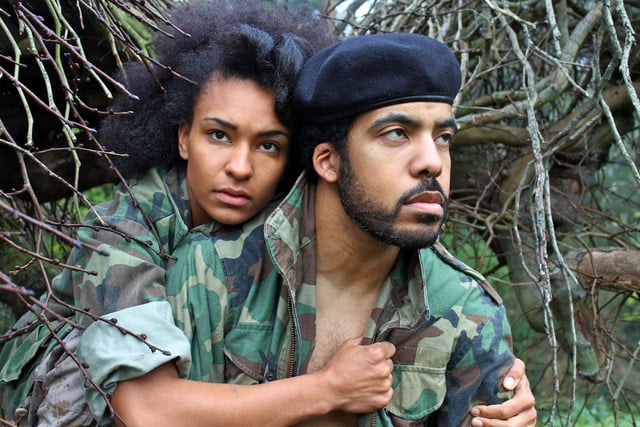 Early in the play, the newly elected Caesar strides through the rabble.  He’s just about to exit when he spies Brutus. Grabbing Brutus’ shoulder for a moment, Caesar looks at him as if to say “Amongst all these sycophants, you are my true friend.”  For the merest of seconds, Brutus hesitates, remembers their friendship, their past, all that had come before. In this flicker of hesitation, we can see that whatever follows will not come easily.

Michael Gene Sullivan created a Julius Caesar that is at once entirely new and entirely authentic. Set in modern Africa, the actors are costumed in African military uniforms and speak in a polyglot of colonial English and Jamaican creole, with brief overtones of Irish brogue and Yiddish. The set is a third world concrete jungle, framed by two huge concrete stanchions such as would hold an elevated highway. Bits of green overgrowth creep through, giving a sense of decay and foreboding. The only hint of Rome is a painted drop of ruins far in the distance.

This production by the African-American Shakespeare Company feels different from  Sullivan’s work with the San Francisco Mime Troup, which tends toward the cartoon-y. By way of comparison, this Julius Caesar has such depth and nuance that it’s equal parts tragedy and history. While Sullivan’s politics are still very present, they’re don’t bludgeon the audience, which makes the message all the more effective.

However, I’m letting the politics get ahead of the art. This version of Julius Caesar was staged with a miniscule cast, starring Tristan Cunningham (Portia), Chico Purdiman (Cassius), Frederick Pitts (Mark Antony), Jeffrey Moore (Julius Caesar), Amy Lizardo (Calpurina) and David Moore (Brutus). Actors darted down theatre aisles with flashlights in hand, giving the impression of a far larger cast.

Chico Purdiman provided a Cassius whose robust physicality was well matched against the restrained, coiled tension of David Moore’s Brutus. This restraint remained until the very end, released only when Brutus suicided on the battlefield. Pitt’s Mark Antony was poetic and eloquent – and ultimately as much a manipulator as any modern day politician.

The African-American Shakespeare Company version of Julius Caesar was effective, in part because the love of the original language seemed palpable. Lines we’ve heard hundreds of times (“it’s Greek to me,” “the unkindness cut of all,” the valiant taste of death, but once,” etc.  were entirely new in this matrix.  Striking too, was the high energy of the battlefield  No mere soldiers declaiming lines, we hear bullets flying in the pitched African battle.

This Julius Caesar is well worth spending time with.  Fast-paced, the action flies by, leaving you blinking your eyes when the house lights come up.  The African-American Shakespeare Company may be about re-envisioning Julius Caesar, but this play will have you re-envisioning Africa.