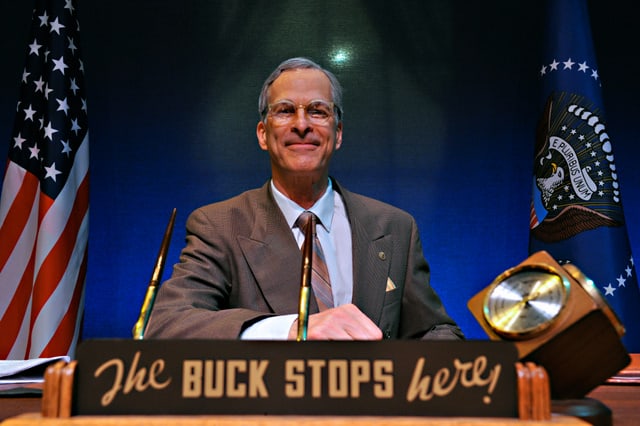 Give ‘Em Hell, Harry is a brilliant script, perfectly chosen for this audience and this point in an election year. Although first produced on Broadway in 1975, Truman’s anti-Wall Street jabs are so timely, the passage of 37 years seems inconceivable. Political biography is often a hard sell, but Give ‘Em Hell, Harry, was such a laugh-aloud, feel-good production that it evoked a bit of American pride – and even a certain fondness for Herbert Hoover.

The play won the audience over from the very beginning with Truman’s musings to his daughter:

“… and so, Margaret, to be a good president, I fear a man cannot be his own mentor. He cannot live the Sermon on the Mount. He must be a Machiavelli, Caesar, Borgia, an unctuous religio, a liar, a what-not, to be successful. So I probably won’t be, thanks be to God. But I’m having a lot of fun trying the opposite approach. Maybe it will win. Lots of love, Dad….”

Other passages were so compelling that the audience  cheered Truman’s speeches as if they were happening in real time.

Peter Villkin is superb as Harry S Truman (the “S,” which was a name, not an initial, was an issue for AP reporters who invariably put a period after it). Being the one man in a one-man show, taxes the reserves of  the best actors. Villkin, who even looked vaguely like Truman, had the stamina to maintain audience interest. His sense of timing helped make this a funny, well-paced production that interspersed comic bits with the story line of the Truman presidency.

Action moved quickly from one key aspect of the Truman administration to another as it flipped from imaginary conversations with Herbert Hoover and FDR, jokes about Stalin at Potsdam, confrontations with the KKK, exasperation over McArthur’s fanning flames of Chinese enmity during the Korean War, and criticism of his successor Eisenhower for not supporting George Marshall after Joseph McCarthy accused Marshall of being soft on a communism.  These rapid shifts flowed together seamlessly. Even a younger person who might not be schooled in the foreign and domestic issues of the time could quickly grasp the central issues that Villkin took up.

In addition to an excellent script and cast, the set  was very simple. An impressively large desk over which lights suggested a window was all that was needed to evoke the Oval Office.  These clean lines didn’t make it into the second act as the stage became more cluttered by a voting booth and other pieces.

The only catch here had virtually nothing to do with the production. The end of Truman’s time in office found him with less public support than even Richard Nixon on the eve of his resignation. One wonders what drove this lack of support – and how Truman made the transition from the most unpopular president on record to one who today is one of the most popular.  The lack of information here played to my cynicism and made me wonder just how real this character could possibly be. A well-placed director’s note might remedy this problem.

3 out of 5 stars (Recommended)