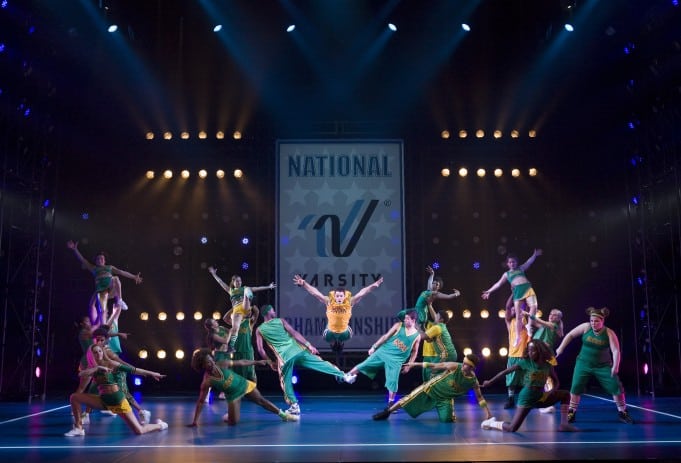 Bring It On: The Musical

If you liked Disney’s High School Musical, you will love Bring It On: The Musical. With high-powered energy, imaginative choreography, and stunts that you won’t see outside of halftime, this over-the-top performance drew raves from an audience composed largely of 20-somethings.

However, if you found High School Musical, saccharin and cloying, you’ll be joining those who fled at intermission. They came, dug the LEDs, and appreciated the floating screens that replaced a traditional set. However, after being wowed by the stunts, they had their fill.

Despite their web site (which immediately went to their Facebook page), I was rather hopeful about this show, taken as I was by one of the creators’ remarks that the show had subversive elements. Directed and choreographed by Andy Blankenbuehler (In The Heights), with music by Tom Kitt (Next to Normal) and Lin-Manuel Miranda (In the Heights), and a libretto by  Jeff Whitty (Avenue Q), the show certainly brought some of the best talents to bear.  However, even these talents failed to provide the necessary  ballast.  Bring it On is about as subversive, as High School Musical.

The plot device of competing cheerleading teams on either side of the racial divide was hardly enough to hold audience attention. Do we really want to know about the spoiled rich, white girls of Truman High? Their counterparts at  Jackson High are more interesting, but even they are largely cardboard cut-outs. The wink-wink-nudge-nudge suggesting a modicum of ironic self-knowledge doesn’t exactly redeem this. A better approach would be to can the script all together and go straight to the choreography and stunts, which were truly breathtaking. However, just as porn flicks persist in having plots, Bring It On labors under its own tortured burden. In both instances, plot is hardly the reason d’etre.

This may seem unduly harsh. The web site notes that this play is recommended for children ten and up. I suspect this show will make the holiday for hordes of prepubescent girls. With a strong cast and stellar moves, there is certainly far worse holiday fare for the younger set. The sheer physicality of this is a clear win. However, many parents might find themselves wishing a modern John Belushi would to take to the set and put a different spin on things.

Bring It On: The Musical