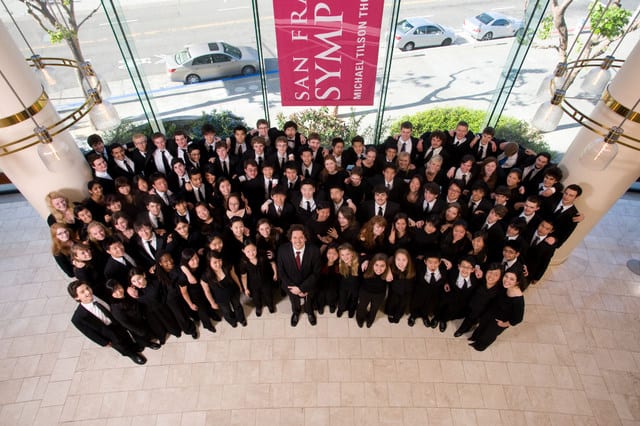 The San Francisco Symphony Youth Orchestra (SFSYO) opened their season with a well-constructed program that included dances from Falla’s beloved Three-Cornered Hat, Tchaikovsky’s Violin Concerto in D major Op. 35, and Prokofiev’s Symphony No. 5.  With something dear, something impossible, and something intellectually challenging, this program had something for everyone.

For those into big sound, the works by Falla and Prokofiev carried the day. I’m not sure how these were originally orchestrated, but with ten basses, as well as a full percussion and brass section, both proffered a big full sound that just rocked Davies Symphony Hall.

The Falla selections – all from the second act – were an excellent choice to start the concert. If the SFSYO hadn’t gotten your attention with these three dances, I dare say you could slept through both the earthquake and the tsunami that wracked Japan earlier this year.

However, the rock star of the day was Alina Kobialka, playing Tchaikovsky’s Violin Concerto in D Major. I’m no violinist, but the impossibly high notes of the first movement played high up on the body, combined with the lightning speed of the finale, seem to more than justify Andre Previn’s characterization of this piece as “fiendishly difficult.” Just as being able play all of Chopin’s etudes seems to be a requirement for professional pianists today, this Tchaikovsky concerto is the piece to which many violinists, including Isaac Stern, Joshua Bell, Andre Previn, and Jascha Heifetz turn.

The heart of the piece lay in the second movement, the Canzonetta. A Canzonetta is a type of Italian secular vocal music. However, the term is also used to describe certain instrumental pieces that are song-like. The beginning of this second movement brought out the lovely lyrical quality of Kobialka’s playing more than passages that were far more difficult. The violins, flutes and woodwinds were so deliciously understated that they gave this movement a delicacy and moment.

The concert closed with the Prokofiev, which perfectly balanced the Falla at the outset. Like many other smart artists, Prokofiev left Russia in 1918. However, he returned in the 1930’s… and by 1948 was writing groveling apologies for his melodies, his vocal scores and even his atonality. Thus, his 1948 response to criticism by the Central Committee reads: “Beyond doubt I have been guilty of atonality. But one thing I must say. When I came to recognize that the tonal structure of a piece of music is to be compared with building on a solid foundation, whereas atonality is a building on sand, it was not long before a striving towards tonal writing began to show itself in my music.”

However, before those sad days, there was the Fifth Symphony. Michael Steinberg’s program notes underscore exactly why this work is so important.  He notes “Many composers in the 19th and 20th centuries, even very good ones, were baffled by the problem of how to confront the sonata style defined by Haydn, Mozart, and Beethoven, of how to get at its substance and not just its shell.” The interpretative chops this requires are beyond the scope of most youngsters – with a broad exception of the SFSYO.  As performed by the SFSYO, this first movement is pure gold, especially the end that fakes you out – much like a contemporary vocalist – only to deliver the most majestic of crescendos at the end.

My only criticism is that the powers-that-be should consider changing the name of the SFSYO. Call them the San Francisco Symphony All Stars, the San Francisco Symphony Ready for Prime Time Player, call them anything that doesn’t include the word “youth.” These guys are better than many adult symphonies – and weighing them down with the Y-word is off-putting to potential audience members who don’t know what they are missing.