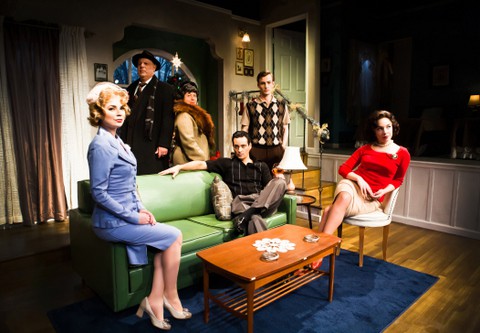 Tennessee Williams’ best-known works (A Streetcar Named Desire, Cat on a Hot Tin Roof) are invariably melodramas preoccupied with the eccentric character of the American South. Although it takes place in that region of the country, Period of Adjustment is a lighter examination of suburban married life that could easily be located anywhere. And despite being a more overt comedy, Williams doesn’t shy away from his serious recurring motifs of familiar dysfunction, homosexuality and sexual repression.

From what one can discern the play’s setting during Christmas Eve is incidental to the plot, so the decision to offer this production as being celebratory of the season is somewhat disingenuous. On the other hand, inasmuch as the forced sentimentality of the holidays can often lead to more acrimony than harmony, the choice makes sense and might even be considered a bit subversive.

It’s 1958 and twentysomething couple George and Isabel Haverstick have just gotten married (the day before). After the ceremony the newlyweds drive cross-country in George’s ’52 hearse and he discloses to his bride that he’s quit his job. Suffice it to say the honeymoon doesn’t go well and George impulsively decides to visit his older Korean War buddy, Ralph Bates, in High Point, Tennessee.

Unbeknownst to George, Ralph has also resigned his position and as a consequence his wife of four years, Dorothea, has just left him and taken their “sissy” young son along with her to stay at her parents. What unfolds is an insightful comedy on the messy complexity and uncertain motivations behind human relationships.

The opening sequence has Ralph (Johnny Moreno) alone in his home coping with being abandoned by his spouse. Moreno gives a convincing portrayal of a Southern gentleman who’s doing his level best to maintain his dignity as his life unravels before him. His initial scene is with Isabel (MacKenzie Meehan), who’s been dropped-off by George, and together they hit just the right note of awkward ambivalence. As the conversation progresses, however, they warm up to one another and it becomes clear that they’re two very lonely people desperate to connect with anyone with a sympathetic ear.

The lovely Ms. Meehan is absolutely captivating as a modern, albeit prudish, Texas belle. She brings an alluring femininity to a role that’s at once strong and vulnerable, giving her an opportunity to draw from a wellspring of talent and exhibit her impeccable comic-timing. And a formfitting skirt suit – and the obligatory pearl necklace – by costumers Tatjana Genser and Miyuki Bierlein enhances her character’s beauty and period authenticity. Bravo!

George (Patrick Alparone) arrives shortly thereafter, and it becomes readily apparent that his friendship with Ralph is quite intense. As they greet one another he literally leaps onto Ralph wrapping his legs around him, all the while ignoring the astonished Isabel. As more is revealed about George it becomes obvious that his marital problems stem from something much deeper than being unemployed or having an anticlimactic wedding night.

Alparone is asked to portray a veteran who’s suffering from severe body tremors ostensibly caused by posttraumatic stress syndrome. Remarkably, he steadfastly conveys his character’s affliction and genuine anguish while somehow maintaining a comical persona that’s a pleasure to watch.

One suspects, however, that his symptoms have as much to do with a man struggling with his own sexuality as it does with any traumatic wartime experience.  The gay subtext of his many funny exchanges with Ralph is unmistakable.

George even goes so far as to suggest they run away together to Texas and start a cattle ranch in the land of “dignified Texas longhorns.” And a scene where Ralph attempts to place his hand on George’s shoulder could (without much imagination) have entered “Brokeback Mountain” territory had George not protested all too much!

Maggie Mason as the “homely” Dorothea gives a relatively brief but nonetheless indelible supporting performance. She exudes a palpable warmth and grace that serves as a calming influence upon the hysterical ranting of those around her.

There’s a distinct change of mood upon the entrance of her character in the final act, and Dorothea is instrumental in bringing things to a light-hearted (if not wholly satisfying) conclusion. The slightly contrived denouement was undoubtedly the product of a playwright constrained by the conventions of the time from fully embracing the controversial themes he had the courage to broach.

Equally impressive turns by Joe Madero and Jean Forsman as Dorothea’s parents bring depth and a sense of backstory that was not necessarily present on the written page. And one must not fail to recognize the invaluable contributions of sound designer Cliff Caruthers that just about brought down the house!

Bill English keeps the pacing taut and the staging moving with a clockwork precision that’s evident throughout. His deft direction, along with his extraordinary cast and skilled creative team, coalesce to make this an exemplary presentation of a lesser-known work by one of America’s preeminent 20th century dramatists. It’s a must-see!