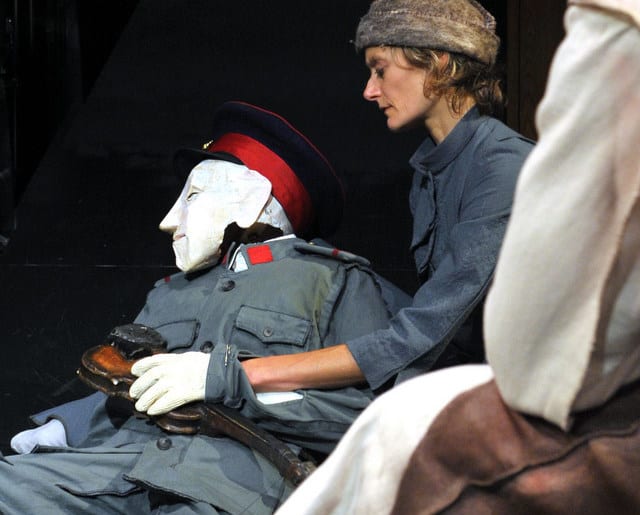 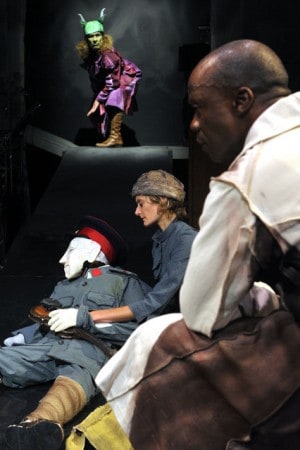 The Aurora Theatre Company has packed its tiny thrust stage with Bay Area artistic luminaries. Former SF Ballet principal Muriel Maffre joined L. Peter Callender and Joan Mankin for The Soldier’s Tale, which opened at the Aurora in Berkeley this week. With a score written in 1918 by Igor Stravinsky as a chamber piece for seven musicians, the story is based on a book by C.F. Ramuz, with a translation by Donald Pippin done in understated rhyming couplets. The musicians (percussion, violin, clarinet and piano)  include artists from the San Francisco chamber collective, Earplay.

The Soldier’s Tale is a crossover piece that seamlessly integrates puppetry, dance, music and acting. The polished artistry that Maffre, Callender and Joan Mankin brought to this piece recalls the classic stories for ballet or opera. Taken by themselves, such pieces speak to recognizable archetypes. With stories so simple, we might take a pass on them all together, were they not elevated by the craftsmanship in the telling so that they resonate once more, larger than life, so we know them again.

The Soldier’s Tale is worth taking in just to watch Muriel Maffre handle the puppet. We’re used to seeing puppeteers as intrinsically separate from the characters they manipulate, which is perhaps why most puppets seem so two-dimensional. Here, Maffre moves with the soldier  on stage, wearing a slate grey dress that matches his soldier’s grays, both becoming him and remaining separate enough to treat him exquisite tenderness. Both she and L. Peter Callender become the parents of this character, who is profoundly wounded in spirit after a Faustian bargain in which he suffers “so much remorse, so much chagrin, for a lousy two-bit violin.”

Just as Maffre straddled the divide from both embodying the puppet and being someone other, the puppet Joseph straddles the divide of being entirely alien with his off-white, unnaturally large head, and being recognizably human. This alien nature mirrors the character’s lifeless soul, about which the narrator  says “what good is butter on the bread, when appetite itself is dead.”

L. Peter Callender doubled as the narrator and King. L. Peter Callender has such compelling physical presence that he could probably make folding the laundry mesmerizing. With a quality of motion comparable to Ben Vareen, he’s fascinating to watch even when he removes himself from the action to linger by the entrance.

The idea of the homecoming soldier remaining separate from human discourse is something we think we understand, being quick to impose our recent history on it. While Stravinsky and Ramuz were not writing a war story, The Soldier’s Tale speaks directly to the experience of World War One, when thousands of young men returned home from war alienated in spirit. Joseph’s Faustian bargain is all the more alienating because he’s given his violin to the devil. Only half human, he embodies a strange wistfulness.

My only nit with this one is that folks who wince at allegorical fairy tales are bound to find this one just a wee bit too precious. However, it you are only going to see one such story, it should be The Soldier’s Tale.