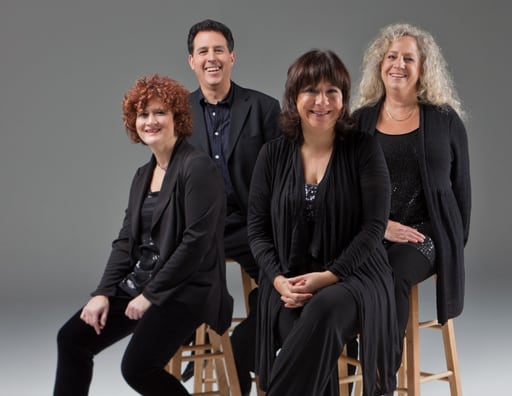 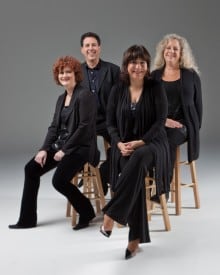 Being a music critic means contextualizing the music. This might come as a surprise for those who think it’s all about evaluation. While there’s obviously an element of opinion, that’s not the heart of the matter. In an ideal world, the critic leaves the reader a little bit smarter and more informed, by providing intelligent remarks about a performance that the reader might never see.

I’d been listening to various versions of Dvorák’s “American” (String Quartet No. 12 in F Major, Op. 96) and Edwin Schulhoff’s Quartets No. 1 and 2 for the better part of August and September in anticipation of this salon, so I thought I was reasonably prepared.  However, none of the works I’d been listening to prepared me for the breathtaking experience of sitting ten feet from violinist experience Bettina Mussumeli and hearing this stuff performed by the virtuoso Ives Quartet.  Hopefully, they’ll get around to recording these two pieces together. This sampling would have been enough, but Ives Quartet salon also included violist and musicologist Derek Katz. Teaching at UC Santa Barbara, Katz’ specialties include Czech music, nationalism and modernism, all of which speak directly to the program at hand.

The program highlighted the difference between the Czech Dvorák and German-Jew Schulhoff (also born in Czechoslovakia). Although separated by a mere 30 years, the yawning chasm of World War I places them eons apart. Much of this salon focused on how the classical aesthetic changed during this time, using Dvorák’s “American” and Schulhoff’s Quartet No. 1 as exemplars.

The Salon opened with the first movement of the “American,” Simultaneously fluid and supple, animated and pulsating, it was an entirely different experience than the Dvorák I’d been listening to. While reams have been written about the “American” influence on this work (for starters, see “Dvorák on the American Scene” by John Clapham in 19th-Century Music, (1981), Dvorák’s understanding of native American music was minimal, at best, and probably confounded with African-American spirituals. Immediately following the Dvorák, was the agitated first moment of Schulhoff’s first quartet. The difference, of course, is marked by World War I. Insofar as a nationalistic impulse informed the beauty of Dvorák, such an aesthetic died during the war years, clearing the way for the modernist tonality of Schulhoff. While the Dvorák was exquisitely beautiful, Schulhoff was writing from an entirely different place. His service in the war proved searing, as he came out of the experience firmly convinced that the war was, as Katz said, “a moral and political catastrophe,” that caused him to become briefly aligned with the dada movement. His focus  – which is hauntingly evident in his post-Dada work was how to write music that’s historically meaningful. This different aesthetic of modernity stands apart from the path taken Schoenberg, Berg, Webern, and Bartok, all of whom navigated similar waters.

The Ives Quartet and Katz continued through the second and third movements of the respective pieces, pausing to reflect on the similarities and differences between them. Dvorak’s take on ethnic music, was, as Stephen Harrison noted, a variation of Brahms with a sprinkling of “ethnic” tossed on top.

The most animated conversation was devoted to Schulhoff’s 4th movement, which stretches the technical abilities of players and instruments alike. Insofar as the catastrophe of World War I laid the ground work for the greater catastrophe of World War II, Schuloff’s aching viola train whistle and broken mechanistic end to this 1923 movement seems to foretell the disaster that would follow. His death in the Bavarian concentration camp of Wulzburg seems writ large over this piece.  Unlike Schoenberg and Bartok, both of whom ended up in the U.S. after the war, Schulhoff turned east, applying for Soviet citizenship before the war was over. He was arrested for being a Communist shortly after the Molotov-Ribbentrop Pact was severed, and died in the Bavarian camp of Wulzburg, along with his son.

In the brief Q & A that followed, someone asked the very smart question as to why no one had heard of Schulhoff until his recent revival. Harrison spoke to briefly to the politics of contemporary music that favored the cult of Schoenberg, Berg and Webern. This was an interesting take  – that raised the tantalizing possibility that there might have been a tonal solution to the same very real issues faced by post-war composers.

The Ives Quartet will be revisiting the Schulhoff Quartet No. 1 in their September 30th and October 9th concerts. As always, they are worth following.