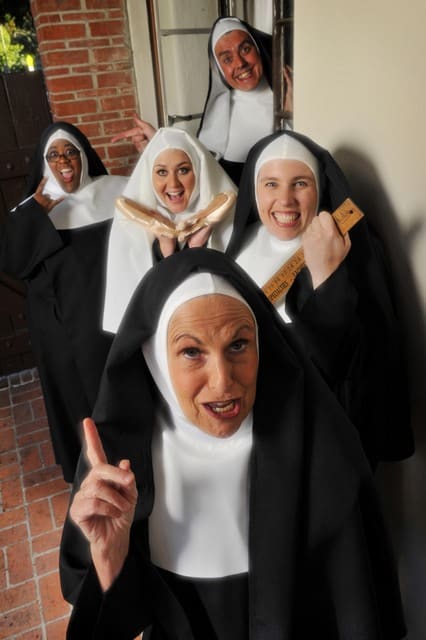 I confess, I entirely missed the Nunsense craze. This isn’t entirely bad because I don’t bring the baggage that I’d bring to, say Gypsy, or Chicago, or any other play with a long production history that I’ve seen too many times. Coming into this with nothing other than the press release and Wikipedia article, I  looked forward to a fun night out, sorely needed after a tedious week.

The show got off to a late start, which is rarely a good sign. During the 15 minutes it took to drum up a functional mic, nuns in full habit (none of that tacky mid-calf length habit here!) wandered through the house, which was about two-thirds full, chatting up and charming the audience. Once a new mic was found and the show finally underway, the house lights remained unnervingly up. While this may have been intentional, it made for an awkward transition.

The central conceit of Nunsense with a Twist is a fundraiser vaudeville of sorts, staged by the Little Sisters of Hoboken whose numbers are sadly diminished by Sister Julia Child, who accidentally poisoned the rest of their number. While this 1985 show must have had enough going for it to garner a ten-year run, none of this was apparent in last night’s production.

Part of the issue lay in lack of modulation. For those of us old enough to vaguely remember the pre-Vatican II world in which the image of the nun is better captured by Ingrid Bergman in “The Bells of St. Mary’s, the idea of a nun being funny is so unlikely that it’s incredibly engaging. This idea is comic because it’s so incongruous. However, Nunsense with a Twist – or at least this production thereof, doesn’t seem to appreciate it’s the distance that makes its subject funny. Instead, Nunsense starts with an attempt at being raucous, and stays that way. The modulated distance that would make this funny just isn’t there for the better part of the show. Some of the strongest numbers, such as Sister Mary Regina’s sniffing RUSH, are funny  – but only because they navigate a distance from the material that immediately proceeded them.

The other issue was the opening night bugs that bedeviled this production. I usually don’t mention these because they have a way of magically disappearing by the second act. However, here the overall production suffered under the collective weight of poorly synchronized dance moves, off-key vocals, and poor mixing in which the band drowned out the singer at times.

This is not to say that Nunsense with a Twist didn’t have its moments. Juanita Harris, as Sister Mary Hubert, had a voice that wouldn’t quit, making “Holier than Thou” the most memorable number in the entire show. Chris Blake, as Sister Mary Regina, came off as a demented Eric Idle (if such a thing is possible). There  were a number of genuinely funny visual gags (such as a nun’s veil pulled into a Wicked Witch of the West hat) and one liners (making holy water by boiling the hell out of it), but these just weren’t enough to sustain the show.

Nunsense with a Twist will be running at the Lucie Stern Theatre through October 2nd.