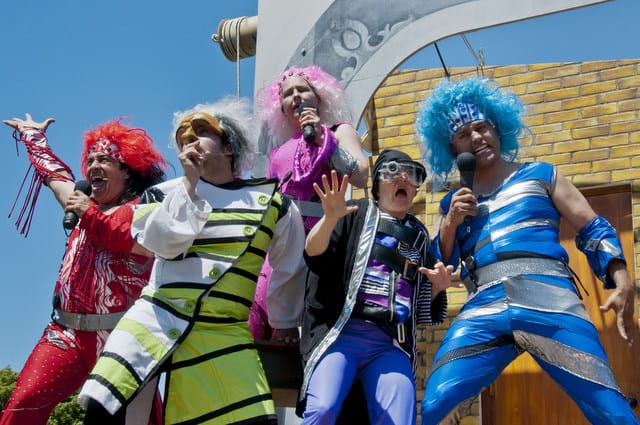 Just like the Good Humor Man, the San Francisco Mime Troupe is a veritable sign of the season. With their signature Red Star truck, they circle through Bay Area and environs, before landing in a local park, where their excellent jazz band cranks out the tunes until it’s time for the show to begin. This weekend, their truck landed at Columbus and Union, whereupon the venerable statute of Benjamin Franklin found himself tricked out in a sexy black SF Mime Troup tank shirt.

While the SFMT doesn’t have anything up on Ben (except for the shirt) with 52 years of wowing audiences, they’re getting to be equally venerable, at least in terms of theatre years. While the SFMT has stayed true to its roots of free (more about that later) theatre in the community, if there were any unreconstructed hippies in the audience, they weren’t exactly letting their freak flag fly. There wasn’t even an awful lot of grey hair in this audience, which was dominated by 20 and 30 somethings. This speaks to the continued vitality and relevance of the troupe.

Given the title of the current work “2012 – The Musical,” I mistakenly assumed that the SFMT was taking on the upcoming campaign, and I puzzled how the current crop of candidates could possibly look more like cartoons than they already do. Instead the play opened with gratuitous Obama-bashing. This section seemed so fragmented and disconnected from the balance of the play that I later asked playwright Micheal Gene Sullivan about it. Sullivan pointed out that this was as much to “validate people’s anger as it was to validate people’s hope,” and that it was important to call Obama on selling out the working class. Politics aside (if such is possible with a SFMT play), this section seemed incongruously added, and detracted from the balance of the afternoon’s offering about a thinly disguised Theatre BAM and corporate funding.

This off note aside, it’s hard to criticize the SFMT because they’re just so darn good. These folks work well together, a fact that Sullivan attributes to the long time the works are in production. Unlike other companies, production time for SFMT works last eight to ten weeks, which, coupled with a relatively long run time, gives the work time to gel. Regardless of the recipe, Lizzie Calogero, Keiko Shimosato Carreiro, Cory Censoprano, Siobhan Marie Doherty, Michael Gene Sullivan, and Victor Toman work seamlessly together.

Political theatre is a hard sell in the best of times as it easily becomes more and more about the political and less about theatre. No humorless left wing hacks, the SFMT laughs at themselves, with characters like “Working Class Man,” and ups the ante by confronting the two-dimensionality of their subject material with a commedia dell’arte approach. At their best, they’re rib splitting funny, with an eye toward great costuming. However, a nagging feeling remains that one is being made to eat their peas.

When chatting with Sullivan about the importance of youth theatre, he mentioned that the SFMT has three separate youth programs, including the after school Youth Theatre Project, the Young California Writers Project and a summer workshop for college students. Having drunk the kool aid a long time ago on the importance of free theatre programming for young people, I was impressed by the breadth of their outreach. The SFMT intuitively understands that you don’t build theatre community for young people by a “pay to play” model. By keeping these programs free or at very nominal cost, the SFMT does the most radical thing of all: encouraging young people to have a voice.

“2012 – The Musical” will no doubt be coming to a neighborhood near you.  It’s worth taking time to enjoy this free production.

3 out of 5 stars (Recommended)