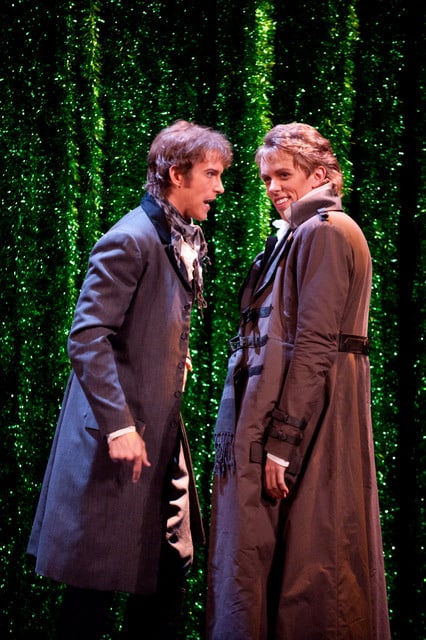 4 out of 5 stars - 'Smashing'
Merola Opera
by Gioachino Rossini

Sung in Italian with English supertitles 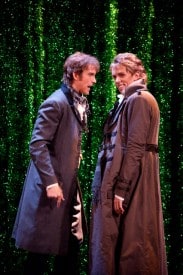 Wedged between the end of the Ring and the beginning of the new opera season is Merola summer season. Merola bills itself as the world’s finest training program for aspiring opera professionals, and with a list of alums that includes the fabulous Mark Delevan, who just finishing wowing everyone as Wotan during Ring Cycle last month, they can easily back that claim. Their summer season includes Il barbiere di Siviglia, which opened last night.

I’ve had the privilege of seeing a lot of technically brilliant opera  – and all too often it gets more than a wee bit soporific.  The bottom line is that emotion and vocal technique are at odds with each other. At a very simplistic level, think of the times you yelled at your offspring only to find your voice shrieking… Not a pretty sight. Magnify that phenom a gajillion times and you can appreciate understand why vocal pyrotechnics often end up taking precedence over the reason for the work in the first place.

Last night’s Il barbiere suffered from none of those problems.  It would be all too easy to do the opera snob thing and make comparisons to Nina Stemme, Byrn Terfel or others –but that would be so beside the point. This was the first opera buffa I’ve seen in ages that truly served the craft by being laugh-aloud funny. This was not some pompous Il barbiere whose wit dried shortly after the ink from Rossini’s pen, but one with a Don Basilio in headphones, a Count Almaviva stumbling Dr. Bartolo’s house with “The World is Coming to an End May 21” with the date crossed out and replaced with October, and Dr. Bartolo tricked out as a Venetian gentleman, albeit with a Bozo-the-Clown shock of red hair that matched his stockings.

While male voices were occasionally overshadowed by the opera orchestra, especially in the beginning, the cast got better and better as the night progressed. Nary a note of ornamentation was missing from Suzanne Ridgen’s rivulets of notes pulsating forward giving wit and intelligence to a lovely Rosina. Jonathan Michie completely won the audience over with his performance of Figaro’s Largo al factotum.

Throughout the evening, I could help but wonder if our Congress would function better as comic opera instead of a poor imitation of the World Wrestling Foundation. John Boehner might make a passing fair Dr. Bartolo, with Harry Reid as Don Basilio. The idea fails miserably however, because none holds a candle to Suzanne Ridgen’s lovely Rosina, especially when she’s got forks stuck in her hair to emulate the rays of the Statue of Liberty while holding a candleabra as Liberty’s torch, and none is as cunning as Jonathan Michie’s Figaro. However, while we may have something to worry about politically, if this is the next generation of opera, we’re in good hands.

Il barbiere di Siviglia runs through August 7th at the Herbst. The Merola Grand Finale will be at the War Memorial Opera House on August 20th.